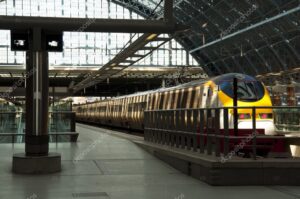 Eurostar is at risk of collapse without receiving financial support from the British government, business leaders have warned.

Passenger numbers on the Channel Tunnel operator have fallen by 95 per cent since travel restrictions were imposed last March. It is at risk of running out of funds to run services to St Pancras station in London.

Rishi Sunak, the chancellor, and Grant Shapps, the transport secretary, were urged to act in a letter over the weekend from 28 signatories, including Richard Foley, senior partner at Pinsent Masons, the law firm, and Brian Bickell, chief executive of Shaftesbury, the West End landlord. The letter demanded “equal access to financial support as companies in similar positions — at the very least this should include business rates relief and access to government loans”.

Britain sold its stake in Eurostar to the French government for £757 million in 2015. France has injected €200 million into Eurostar during the pandemic. MPs, including Theresa May, also wrote to the chancellor urging him to offer financial support last month, The Sunday Telegraph reported.

Read more:
Eurostar survival ‘at risk’ without cash from government