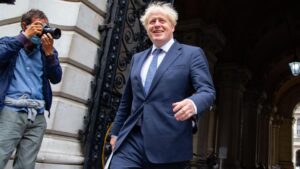 Boris Johnson will hold talks with business leaders today about cutting red tape as ministers draw up plans to turn Britain into the “Singapore of Europe” now that it has left the European Union.

The prime minister will speak to 30 senior leaders about topics such as “regulatory freedoms” and reforming EU rules. Rishi Sunak, the chancellor, has been charged by Mr Johnson with leading a cross-Whitehall committee which will require departments to closely examine which regulations can be reformed.

The plans attracted controversy this month when it emerged that workers’ protections enshrined in EU law, including the 48-hour working week, were among regulations being considered for reform. According to the Financial Times options under consideration include changing the rules about rest breaks at work and including overtime pay when calculating holiday pay entitlements. Officials also considered removing the requirement that businesses log detailed daily reports of working hours.

Ministers have denied that the government is planning to lower the standards of workers’ rights and said that they had yet to review the proposals.

Kwasi Kwarteng, the business secretary, said: “We want to protect and enhance workers’ rights going forward, not row back on them.” The business department said that labour market policy was kept under “regular review” to ensure businesses had the “appropriate freedoms and flexibility to innovate and grow” while safeguarding protections for workers.

Mr Sunak will chair a committee in Downing Street that will focus on cutting red tape. He said: “Now that we have left the European Union, we have an opportunity to do things differently and this government is committed to making the most of the freedoms that Brexit affords us. This isn’t about lowering standards, but about raising our eyes to look to the future — making the most of new sectors, new thinking and new ways of working.”

A government source said that Mr Johnson was pushing for Britain to become a low-tax, low-regulation regime like Singapore. Last month Mr Johnson raised the prospect of tax cuts for entrepreneurs. He told a Facebook question-and-answer session: “We’ll be looking at the tax environment and the regulatory environment and everything we can do to encourage and support business.”

This evening the prime minister will speak to the leaders of businesses such as BT, BP, Tesco, Unilever and Jaguar Land Rover in the first meeting of the committee, named the build back better council. He is expected to provide an update on the pandemic and plans to rebuild the economy. The council will aim to meet quarterly. Each member has been appointed for 12 months.