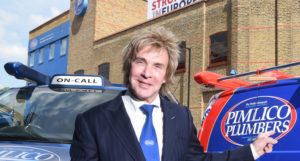 A large London plumbing firm plans to rewrite all of its workers’ contracts to require them to be vaccinated against coronavirus.

Pimlico Plumbers chairman Charlie Mullins said it was “a no-brainer” that workers should get the jab.

If they do not want to comply with the policy, it will be decided on a case-by-case basis whether they are kept on, he said.

Employment lawyers said the plan carried risks for the business.

The NHS is seeking to vaccinate 15 million people from priority groups by mid-February as part of efforts to try to control the spread of Covid-19.

But, Business Matters columnist Mullins, said he was prepared to pay for private immunisations for people at the firm, should they become available, which would be done on the company’s time.

Doctors have warned that key hospital services in England are in crisis, with reports of hospitals cancelling urgent operations after a surge in Covid patients in recent weeks.

Pimlico Plumbers plans to change its contracts for new joiners to require immunisation. It will rewrite its contracts with existing workers and employees as soon as is practical, depending on vaccine availability.

The firm has about 350 plumbers working as contractors and about 120 employees.

Mr Mullins said the firm was “not putting anyone under any pressure” to have the jab.

However, new starters who were not immunised would not be taken on, he said.

“It’s a no-brainer,” he said. “I’ve talked to people who have said: ‘I will queue up all night to get the vaccine.’

“I think it will be the norm in five or six months. To go into a bar or cinema, or go on a plane, you have to have a vaccine,” he added.

“Whatever it costs, I will pay,” he said. “I would pay £1m tomorrow to safeguard our staff.

“If people don’t want the vaccine, let them sit at home and not have a normal life,” he added.

However, employment lawyers said this vaccination policy could be risky.

“They can’t jab a vaccine in your arm,” she said.

People who refuse vaccination and are dismissed may have grounds to make a legal claim, she said.

“Even if they put that [requirement] in a new contract, I don’t think they’d get away with it,” she said.

Employees with more than two years’ service could claim unfair dismissal. But this option is not open to workers and self-employed contractors.

Broadly, people can refuse vaccination for legitimate reasons such as being pregnant or breastfeeding, for religious reasons, because of disability or allergy, or for ethical vegan reasons if the jab contains animal products.

Dismissal for employees with one or more of these protected characteristics could give rise to a discrimination claim.

People who are hesitant about taking the vaccine for personal reasons would not be able to claim discrimination, but could potentially claim unfair dismissal if they have been with the firm for two years or more.