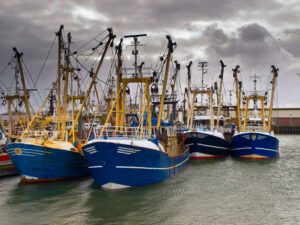 British fishermen have accused Boris Johnson of dishonesty and betrayal over his Brexit fishing deal.

An angry letter from the National Federation of Fishermen’s Organisations accuses him of submitting to a “neo-colonial relationship with the EU on fish for long into the future”.

In the letter the prime minister is accused of sacrificing the industry to get a deal and then trying to mislead both the public and fishermen over what he had negotiated.

“Everything … that you, and others at the very top of government told us, and also told parliament [and] the general public, led us to believe that your stance on fishing was not just rhetoric or expedience, but was based around a principle — that a sovereign country should be able to control who fishes in its own waters and should be able to harvest the fish resources in its own waters primarily for its own people. That proved not to be the case,” says the federation’s letter to Downing Street.

“It is not that, in the end, you were forced to concede in the face of an intransigent and powerful opponent that has caused such fury across our industry, it is that you have tried to present the agreement as a major success when it is patently clear that it is not.”

Anger is growing in the industry, not only over the deal but also over problems with new customs paperwork that is hitting Scottish fishermen particularly hard. Many have kept their boats in port as distribution problems have stopped their consignments from reaching customers on the Continent.

The transport company DFDS, which consolidates smaller shipments into truckloads for export, halted its operations last week after delays in getting on top of the new customs paperwork. The company’s shipments are not expected to resume until next week, and even then are likely to take two days rather than one to reach markets in the EU.

Anger at the delays was exacerbated by the Scotland Office minister David Duguid, who was asked by BBC Radio Scotland how long it would take before trade began to run smoothly again. “Well, how long’s a piece of string?,” he told Good Morning Scotland before adding: “We are working day and night in resolving the issues that we know about and that we can fix directly.”

In the Commons Douglas Ross, the leader of the Scottish Conservatives, told George Eustice, the environment secretary, that financial compensation was “clearly needed by our fishermen right across the country”.

The Scottish Liberal Democrat MP Alistair Carmichael described the situation as “a shambles of the government’s own making”.

“For years this government has promised our fishing industry a sea of opportunity, but today our boats are tied up in harbour, their propellers filled with red tape manufactured in Whitehall,” he said. “Yesterday the prime minister told the liaison committee that compensation had been considered for our fishing industry. Who is going to be compensated, for what and by how much?”

Mr Eustice described the issues being faced by fishermen as “teething problems” and said the government was looking into the case for compensation.

Downing Street later confirmed that there would be compensation for affected businesses, and said it did not believe the companies were to blame for delays or losses. “We have said that we are looking to compensate the fishing industry given they face temporary issues, and we accept that this may have been through no fault of their own,” the prime minister’s spokesman said.

Victoria Prentis, the fisheries minister, came under fire after admitting that she did not read the Christmas Eve deal because she was too busy organising local festivities.

Jacob Rees-Mogg, the leader of the House of Commons, was also attacked after giving a flippant response to Scottish concerns over the impact of new border controls. He said that fish were “better and happier” after Brexit.

The Brexit deal struck by Mr Johnson has left the EU with 75 per cent of its fishing quota, by value, caught in Britain’s waters until the end of a five-and-a-half year transition period.

While the quotas will be up for grabs in annual talks from 2026, the federation suggests that any new negotiations will be “Groundhog Day”, with the EU “repeatedly exerting its ability to bring greater economic power to bear on the UK, who after protests will again and again capitulate”.

“Depressingly, we will remain tied into a neo-colonial relationship with the EU on fish, despite our rights under international law, for long into the future,” wrote the federation in its letter to Mr Johnson.

“This was our moment in the political sun — a small but symbolically significant industry had an opportunity to break free of an asymmetric and fundamentally exploitative relationship with the EU.

“We failed in this agreement to break out of that grip, and it would be much better if you, with humility and honesty, conceded that you tried but failed — rather than implying that you had handed us the keys of our liberation, when you have not.”