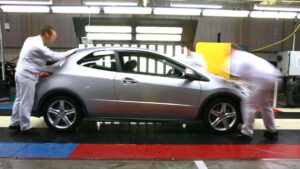 Honda has blamed international supply problems after temporarily halting some operations at its plant in Swindon.

The Japanese carmaker intends to resume production tomorrow, having reduced work at the Wiltshire site yesterday.

The company, which is to close its Swindon factory this summer, employs about 3,000 people and makes up to 150,000 new cars each year in the UK. It said yesterday that “global supply issues delays” had forced it to halt operations for the second time in two months. In December, it cited transport-related parts delays when announcing a stoppage.

Vessel delays and congestion in and around some of the county’s leading container ports prompted the carmaker and other British importers to examine air freight routes last month.

The supply chains of Honda and other leading automobile manufacturers are built around an intricate “just-in-time” system of carefully scheduled component arrivals.

“Honda has confirmed to employees that some production activities will not run Tuesday and Wednesday due to global supply issues delays,” Honda UK said. “The situation is currently being monitored with a view to restart production on Thursday.” The Civic and Civic Type R models are produced at its plant in Swindon. It announced plans to pull down the shutters on the site two years ago, saying that an unprecedented shift toward electric vehicles had prompted it to take European production back to Japan.

Honda executives insisted that Brexit — and the prospect of disruption in Britain’s trade relationship with the European Union — was not related to their decision on the location of future manufacturing.