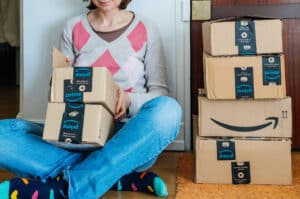 The price of Chinese products sold on Amazon and eBay has jumped after tougher tax rules came into force on January 1.

Online marketplaces now have to account for the VAT paid on products sold on their platforms by third party sellers through deducting the tax at source. The change was made amid growing concern that thousands of mainly Chinese sellers were evading the tax by using fake VAT numbers and shell companies to sell products in effect tax-free.

Analysis of platforms such as eBay and Amazon suggests that the move has had an instant effect, with potentially tens of thousands of products rising in price significantly overnight. Many items are now about 20 per cent more expensive.

Campaigners want HM Revenue and Customs to investigate those sellers who have put up their prices, in an attempt to pursue them for previous VAT fraud.

Examples include weighing scales that were £6.95 on December 30 being priced by the same seller on January 3 at £8.29.

Julius Oliveti, a UK retailer who competes with many Chinese sellers, said the change was remarkable. “You look across all the product ranges where Chinese sellers dominate the marketplace and they’ve all gone up in price by roughly 20 per cent or so.

“It is not uncommon for there to be some fluctuations in price but I’ve never seen anything like this. It is pretty hard to avoid the conclusion that they were not paying any VAT before but suddenly they don’t have any choice so they’re putting up their prices.

“It just shows how much the taxpayer has been ripped off — and how unfair the competition has been.”

A report by the Commons public accounts committee in 2019 found that many Chinese sellers were passing themselves off as British companies in online auction houses by providing fake VAT numbers.

HMRC estimated that the fraud across all online sites could be losing the taxpayer more than £1 billion a year. At the time of the report online marketplaces claimed that they had stringent checks to ensure that all sellers had legitimate VAT numbers and had resisted being made liable to collect VAT on the products sold on their platforms.

But the law was tightened to coincide with changes to VAT brought in at the end of the Brexit transition period. This made online marketplaces responsible for collecting and paying the VAT on goods sold across all their platforms.

Richard Allen, of the group Retailers Against VAT Schemes, said it was imperative that HMRC investigated the sellers that were clearly not compliant before January 1. “The government has done a great job of finally flushing these cheats out of the undergrowth,” he said.

“It is now only right that they are pursued for the VAT they evaded. They should not be allowed to continue to trade until they have accounted for it.”

Chris Heaton-Harris, a minister and former member of the public accounts committee who investigated the issue, said he would raise the matter with Meg Hillier, the committee’s chairwoman.

A government spokesman said: “The new system addresses the problem of overseas sellers failing to pay the right VAT on sales of goods already in the UK at the point of sale, bringing in an anticipated £300 million every year.”