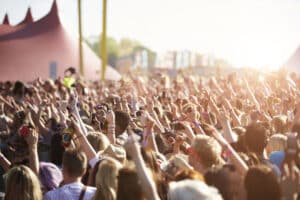 Summer music festivals face cancellation unless the government steps in to provide support, the British music industry has warned.

The call for action came as Emily Eavis, who co-organises Glastonbury festival with her father, Michael, turned to social media to deny that this year’s event has been cancelled. “There’s no news this end yet, we haven’t cancelled,” she tweeted on Monday after the Spice Girls singer Mel B said Glastonbury was not happening this June.

Happy new year to you all!
There’s no news this end yet, we haven’t cancelled. Will let you know right here as soon as we have an update..

Speaking on BBC Radio 5 live, Mel B said: “I know that Glastonbury has been cancelled so a lot of big stage performances are on hold again this year. It’s sad, but we’ve got to get this virus under control.”

The multibillion-pound live music industry is banking on a summer comeback as the vaccine is administered to millions of people. Last year the pandemic resulted in a 90% fall in revenues for festivals.

However, UK Music, the umbrella organisation representing the commercial music industry, said the government needed to act fast to support the live music industry – including guaranteeing cancellation insurance – or festivals would have to be cancelled.

“Government is rolling out the vaccine and is openly speculating about returning to normal by the spring,” said Jamie Njoku-Goodwin, the chief executive of UK Music. “But there is a serious risk that even if this proves to be a reality, lack of notice and available insurance options will mean much of the 2021 summer music season can’t go ahead. The clock is ticking, and any day soon we could see major festivals and events start pulling the plug for lack of certainty. There will need to be a concerted effort from industry and the government together.”

UK Music’s plan, which is detailed in a report entitled Let the Music Play: Save Our Summer, highlights six key actions the government must take to support the industry.

The most important is a government-backed indemnity scheme that operates as a form of Covid insurance by providing financial support if festivals are affected by coronavirus, similar to a scheme that has kept film and TV production rolling in the UK. Last month, Germany announced a €2.5bn (£2.3bn) event cancellation fund.

In addition, UK Music is asking for an “indicative” date for when venues and events can move back to full capacity, and an extension to a VAT rate reduction on tickets and business rates relief. In November, it said tens of thousands out of the almost 200,000 people who worked in the industry were at risk of losing their jobs.

In June, Michael Eavis, said Glastonbury festival could go bankrupt if it had to be cancelled again this year. Last month, Emily Eavis said Glastonbury lost “millions” in 2020, adding: “We’re still quite a long way from being able to say we’re confident 2021 will go ahead.”