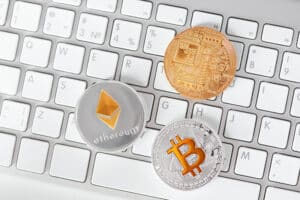 Bitcoin fell sharply to below $29,000 in volatile trading yesterday as investors took profits from a weekend rally in which it had climbed above $34,000 for the first time.

However, the world’s most popular digital currency went on to rise above $32,000 later in the day, suggesting that the market is not yet heading for a spectacular fall of the sort seen in 2018.

Bitcoin nearly quadrupled in value last year as a new wave of investors bought into the cryptocurrency boom. Some institutional investors have been buying bitcoin and other digital currencies as hedges against volatility in traditional markets, but the vast majority of professionals remain sceptical about its value and stability.

As the market for bitcoin investing has grown, so, too, has the availability of derivatives trading in the digital currency, which can exacerbate market moves. Some analysts suggested that bitcoin derivatives were behind yesterday’s volatility.

Sui Chung, of CF Benchmarks, a digital currency index provider, said: “Bitcoin’s implied volatility has hit a ten-month high because options traders assume that the major moves in the price action over the past ten days will continue.”

Cryptocurrencies have no physical form and exist only as strings of computer code. There were 18.6 million bitcoins in circulation yesterday worth nearly $600 billion altogether. A handful of big holders known as bitcoin whales are thought to have a significant influence on prices.