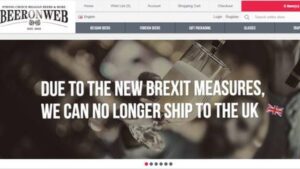 Some EU specialist online retailers have said they will no longer deliver to the UK because of tax changes which came into force on 1 January.

Bicycle part firm Dutch Bike Bits said from now on, it would ship to every country in the world except the UK.

“We are forced by British policy to stop dealing with British customers,” it said on its website.

Another firm, Belgium-based Beer On Web, said it was now shunning the UK “due to the new Brexit measures”.

The companies are angry because they now face higher costs and increased bureaucracy in order to comply with UK tax authorities.

However, it is unclear how many have taken the drastic step of refusing all UK orders.

At the same time, international shipping companies including Federal Express and TNT have said they are levying additional charges on shipments between the UK and the EU.

They said this reflected the increased investment they had had to make in adjusting their systems to cope with Brexit.

The moves follow changes in VAT rules brought in by HM Revenue and Customs on 1 January.

This essentially means that overseas retailers sending goods to the UK are expected to register for UK VAT and account for it to HMRC if the sale value is less than €150 (£135).

A government spokesperson said: “The new VAT model ensures goods from EU and non-EU countries are treated in the same way and that UK businesses are not disadvantaged by competition from VAT-free imports.

“The new system also addresses the problem of overseas sellers failing to pay the right amount of VAT on sales of goods already in the UK at the point of sale, raising an anticipated £300m every year.

“Many EU businesses which currently sell goods to UK customers will have already registered for UK VAT under existing rules and HMRC is working very closely with those who haven’t to ensure they can comply with the changes.”

Adam French, Which? consumer rights expert, said consumers would be “frustrated” if the new VAT rules were applied in a way that causes significant inconvenience.

“It’s vital the government makes it clear to consumers as well as traders what the changes as a result of Brexit mean for them and how they shop. It should also work to ensure UK consumers can retain access to a wide range of competitively priced and quality goods.”

Campaigner Richard Allen, founder of Retailers Against VAT Abuse Schemes, told the BBC that the massive increase in international online shopping had led to VAT evasion on a huge scale.

He said the new HMRC rules were aimed at tackling that, but it was unclear how firms who failed to register for UK VAT would be dealt with.

“Why should a phonograph spares manufacturer in Idaho bother to register for VAT in the UK and how are you going to make them do it?” he said. “And if they send the package anyway, what are you going to do?”

‘Not what we wanted’

“For providing this service, [HMRC] intend to charge a fee to every company in the world in every country in the world which exports to the UK,” said Dutch Bike Bits on its website.

“Clearly this is ludicrous for one country, but imagine if every country in the world had the same idea.

Dutch Bike Bits said it had many customers within the UK and would like to be able to trade with them.

“Not being able to send parcels to the UK does not work in any way in our favour and it is not what we wanted,” the firm added.

“If you’re angry about this, and you may well be so, please contact your elected representative in the UK.”

Other firms held out the hope that their ban on exports to the UK might prove to be temporary.

Scandinavian Outdoor, which is based in Finland and sells outdoor clothing and equipment, posted a message on its homepage saying: “No delivery to UK just now.”

In a further message explaining its decision, it said: “Due to Brexit, we have temporarily closed our store from UK-based customers. Ordering will be possible as soon as our UK VAT registration and the overall process of selling to the UK post-Brexit has been sorted out.”

Meanwhile, mail and freight company TNT has said it is now imposing a surcharge of £4.31 on all shipments between the UK and the EU.

TNT is now owned by Federal Express, which has also “updated” its charges, a spokesperson for the two companies said.

“FedEx/TNT has been making incremental investments to adjust our systems, processes, resourcing and customer-facing solutions to ensure readiness for the change on 1 January 2021,” the spokesperson added.

“To reflect these investments and the incremental cost of customs clearance, we are increasing transportation rates for shipments from UK to EU, and EU to UK.”