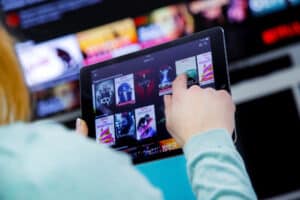 Britons spent 40% of their waking hours watching TV during the height of the coronavirus pandemic, fuelling the biggest year for new subscribers to streaming services.

The number of streaming subscribers has increased by more than 8 million this year. That is nearly double the number of the next best year, with more than three million people signing up to a service for the first time.

“TV has been a pandemic winner and the growth in subscribers shows how important streaming services have now become in the household entertainment mix,” said Richard Broughton, media analyst at Ampere. “Their low monthly cost means that even as many households impacted economically looked to tighten budgets, streaming services flourished.”

The total number of UK subscribers surged 34% year on year, and the number of users has doubled in just three years.

In just the nine months since its launch, 3.5 million people have signed up to Disney+. The service, whose popularity has been driven by the Star Wars spin-off The Mandalorian, has now passed Sky’s Now TV to become the third most popular streaming service in the UK.

Netflix, with 12.8 million subscribers, remains the market leader. Its lockdown crowd-pullers have ranged from Tiger King to The Crown, The Queen’s Gambit and The Last Dance.

However, Amazon, which has added Premier League football to its array of content, has closed the gap on Netflix this year and Prime Video now has an estimated 11.4 million users.

“Arriving as lockdown hit made for the perfect launch conditions for Disney,” says Broughton. “It was perfectly timed to occupy kids off school while parents were working from home, and of course The Mandalorian has proved a global success story.”

Ampere’s figures estimated that the UK’s main pay-TV services – Sky, BT, Virgin Media and TalkTalk – have together lost about 400,000 customers this year.

The researchers estimate that there are now 15.8 million UK pay-TV households, or less than half the number now signed up to subscription streaming services.

Viewers are simply buying access to more TV at a time when most people have had more time at home, and there are few signs that hard-pressed households have cut back on pay-TV to save money.

“The rate of decline in pay-TV subscribers has not accelerated any faster this year than previously,” said Broughton. “We have not really seen customers cutting pay-TV packages to cut costs during the pandemic, or ditching them to only use streaming services. Pay-TV remains remarkably stable in the UK.”