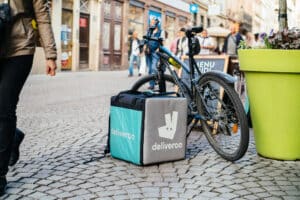 Deliveroo has insisted it has been profitable at an operating level for more than six months after racking up losses of £320 million in the previous financial year and coming close to going bust.

The online food delivery company said yesterday that as well as adding 46,000 restaurants to its platform this year, taking the total to 140,000, it has expanded the number of grocery stores it works with to 1,500, including Waitrose, Sainsbury’s, Morrisons, Aldi and Carrefour.

It launched its delivery services in 187 new towns and cities, and is now operating in almost 800 in 12 countries around the world. It doubled the number of riders to more than 110,000. In May last year, it announced a $575 million fundraising round led by Amazon, valuing it at $4 billion. In April, the Competition and Markets Authority provisionally cleared Amazon’s $500 million investment after accepting that the food delivery firm would go bust without it.

Deliveroo said that with regulatory clearance secured on competition grounds it planned to expand further.

However, it said that after the fundraising there was “no reasonably possible scenario which would result in the business being out of cash in the foreseeable future”. It said that its long-term growth prospects remained positive.