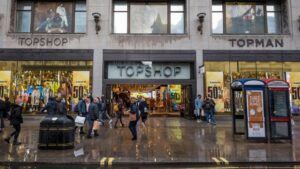 An Australian retailer specialising in larger sized clothes has agreed to pay £23 million for Evans out of the collapsed Arcadia empire.

City Chic Collective will buy Evans’ online and wholesale business but will not take on its 100 standalone and concession shops. Deloitte, administrators for Arcadia, will be able to continue to operate the stores until March to sell existing stock.

Deloitte is continuing to search for buyers for other parts of Arcadia after it fell into administration last month, putting 13,000 jobs at risk.

Topshop, Miss Selfridge and Dorothy Perkins are also up for sale. Deloitte said today there had been “significant expressions of interest for all brands” with a further update expected in the new year.

Evans, established in 1930, sells clothes sized 14 to 32. It made about £60 million in annual sales before the pandemic. Its website alone generated £23 in sales while the wholesale business made £3 million in the year to August.

Phil Ryan, chief executive officer of City Chic, said the acquisition would allow his business to push into the UK market.

“Evans is the perfect addition to the CCC family, I have been following Evans for a long time, partnering with them to sell City Chic for the last 5 years,” Mr Ryan said.

“I am in awe of the heritage brand that is Evans. It is the UK’s leading specialty apparel brand serving curvy women who want effortless style” he said.

City Chic trades under its headline brand as well as value-focused Avenue, CCX for younger customers, and online underwear brands Hips & Curves and Fox & Royal. It has 96 stores in Australia and New Zealand and a website that also sells in the US. Its wholesale business sells internationally including in Europe and the US. It will finance the acquisition of Evans from its existing cash.

Arcadia’s fall follows a series of blows including the hit to sales from the pandemic. It has marked a fall from grace for its creator, Sir Philip, 68, who was knighted in 2006 for his services to retail.

Potential bidders for the business include Mike Ashley’s Frasers Group, Next, Boohoo, and Authentic Brands, which owns Barneys New York.