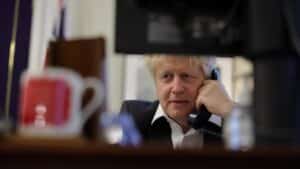 Britain and the EU pledged to “go the extra mile” yesterday to try to secure a post-Brexit trade deal, extending talks after progress on the contentious issue of tariffs.

It is understood that after a week of hostility between the two sides there have been positive discussions on how to ensure an economic “level playing field” after Brexit.

However, Boris Johnson told his cabinet to prepare for no-deal in three weeks as he played down any suggestion of a breakthrough, insisting that Britain and the EU remained “very far apart”. Speaking to broadcasters, after a call with Ursula von der Leyen, president of the European Commission, the prime minister refused to comment on progress but said that Britain would not walk away.

The leaders had spoken after late-night and early-morning talks between Lord Frost, Britain’s Brexit negotiator, and Michel Barnier, his opposite number. They agreed to extend the deadline, which had been due to expire yesterday.

Mr Johnson said: “I’m afraid we’re still very far apart on some key things, but where there’s life, there’s hope. We’re going to keep talking to see what we can do. The UK certainly won’t be walking away from the talks.” He added: “If Ursula is optimistic then that’s great. As far as I can see there are some serious and very difficult issues that separate the UK from the EU.

“We’re going to continue to try and we’re going to try with all our hearts and we’ll be as creative as we possibly can. But what we can’t do is compromise on that fundamental nature of what Brexit is all about.”

Mr Johnson and Mrs Von der Leyen did not put a new deadline on the talks, suggesting that they could run until as late as December 31. The sticking points remain fishing, governance and the level playing field.

The EU has demanded the power to impose tariffs on Britain if the government fails to keep up with future EU rules and regulations. Mr Johnson has rejected this “ratcheting clause” as a threat to sovereignty. Lord Frost and Mr Barnier are understood to have made “limited” progress in narrowing the gaps between the two positions.

They are understood to be discussing what role independent arbitration could have in resolving disputes and at what stage either side might be able to impose retaliatory tariffs and how extensive they could be. In a joint statement Mr Johnson and Mrs Von der Leyen said that continuing talks was the responsible approach. “Our negotiating teams have been working day and night over recent days,” they said. “And despite the exhaustion after almost a year of negotiations, despite the fact that deadlines have been missed over and over, we think it is responsible at this point to go the extra mile.”

Mr Johnson said afterwards that the differences on fisheries and regulatory alignment remained.

“We are always happy to talk and make progress where we can. I do think there is a deal to be done if our partners want to do it but we remain very far apart on these key issues,” he said. “The UK can’t be locked into the EU’s regulatory orbit and we’ve obviously got to take back control of our fisheries.”

He added that a Brexit on World Trade Organisation terms was “the most likely thing now”. “We have made huge preparations for this,” he said. “We’ve got ready. Either way, whatever happens, the UK will do very, very well.”

He is expected to host a “super XO” committee with cabinet ministers on preparations for no-deal this week. The government will also conduct a cross-Whitehall exercise called Operation Capstone to test no-deal scenarios.

He said that he had again offered to talk to national leaders but had been rebuffed. Angela Merkel, the German chancellor, said that both sides should try everything to get an agreement but insisted that negotiations should take place only with Mrs Von der Leyen.

Dominic Raab, the foreign secretary, said earlier that the EU’s demands for blanket tariffs in the event that Britain diverged on regulatory standards were “nuclear”. However, he signalled that there could be compromise over a sectoral approach. “I don’t think we want a nuclear-style reaction where tariffs go up, where we’re back in the same soap opera or drama every couple of years just because there’s a particular issue in a particular sector,” he said. “It’s about making sure we’ve got a relationship we can preserve and nurture which isn’t going to be a thorn in both our sides.”

He said that in the event of a no-deal Brexit the EU would have “zero access” to Britain’s waters. The Times reported on Saturday that the Royal Navy Police could be given the power to arrest EU fishermen if they illegally entered British waters. “I mean, this is one of the ironies: if we leave without a further deal on WTO, Australian-style terms, the French and others will have zero access assured,” Mr Raab said.