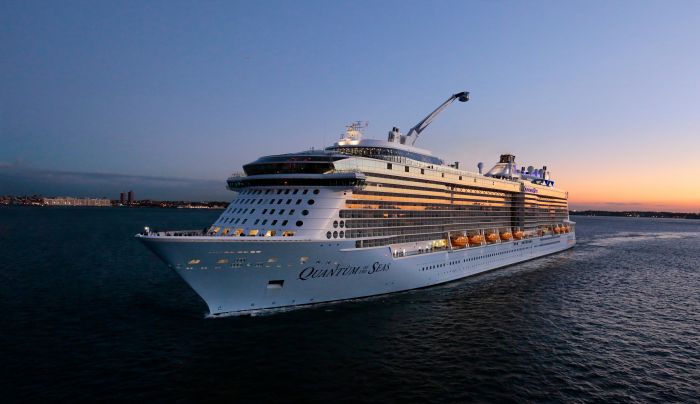 THE OPTIMISM on display just two months ago when Singapore Transport Minister Ong Ye Kung pledged to reopen the city-state and its tourism-reliant economy has taken a beating after a possible local coronavirus case was found aboard one of Royal Caribbean Cruise Ltd.’s ships.

In the early hours of Wednesday morning, the 1,680 passengers on Quantum of the Seas — enjoying day three of a four-day cruise to nowhere — and 1,148 crew were alerted to an announcement that a suspected case of coronavirus disease 2019 (COVID-19) had been discovered, the voyage was being cut short and everyone should remain in their staterooms.

“At 2:30am, the captain made an announcement saying that the vessel was officially going into quarantine.”

It was the second blow in as many months after a highly anticipated air travel bubble with Hong Kong was axed before it even started, leaving would-be travelers on both sides of South China Sea stranded, their hopes of quarantine-free reunions with family and friends dashed.

As Wednesday dragged on, some people on the ship, now back at the Marina Bay Cruise Centre, took to their balconies for fresh air in an all-too familiar 2020 sight — another floating palace, docked but isolated as the arduous process of contact tracing and testing gets underway.

The 83-year-old male who tested positive was found to be negative in a subsequent test, though health officials plan to conduct an additional test, Singapore Ministry of Health said. By late Wednesday, all passengers had disembarked. They were tested before being allowed to leave the terminal.

“Even in the early days of the pandemic, cruise ships posed a high risk of outbreaks, and these in turn can spill over into communities,” said Raina MacIntyre, a professor of global biosecurity at the University of New South Wales in Australia. “The pandemic today is far, far worse than it was in May, when cruising stopped. This means the risk of an infected passenger boarding or an infected staff member being on board is higher now.”

Singapore’s ill-fated attempts to enliven tourism underscore the difficulties of getting any sort of travel up and running even in a nation where community cases have been close to zero for several weeks. Stringent protocols to permit the pilot sea voyages had been established, including extensive testing of crew and passengers. The cruises, including another that’s being run by Genting’s World Dream, were also required to sail at a reduced passenger capacity of 50%.

All 2,828 people on Quantum of the Seas had tested negative when the ship departed Dec. 7, according to a statement from the Singapore Tourism Board. There was also increased sanitization and improved fresh air circulation.

Ultimately, those measures plus others that included mask-wearing at all times, social distancing and buffets staffed by servers in protective gear may have proven insufficient to combat a virus that’s still raging in Europe and the US Globally, more than 68 million people have been infected and some 1.6 million are dead.

Trade and Industry Minister Chan Chun Sing said the case onboard was “not unexpected,” according to a ChannelNewsAsia report, and that the government was prepared for such a situation. The public can be assured that such incidents can be managed properly with the protocols that have been put in place, he said.

Singapore isn’t alone in stumbling. As the coronavirus resurges in Japan, politicians and experts are growing more divided on the impact that a subsidy program encouraging people to travel is having on the spread of infections. A popular “Go To Travel” campaign, which discounts trips to boost regions hit hardest by a lack of tourists, is one of the government’s most prized projects for spurring the economy, and has been heavily backed by Prime Minister Yoshihide Suga.

In Bali, a plan to reopen to foreign visitors in September was scrapped due to a resurgence in cases while Thailand, another popular tourist destination in Southeast Asia, is taking baby steps, allowing just 1,000 international tourists in October versus the some 3.1 million it hosted the same period last year.

Escalating virus numbers in Hong Kong have meant the air travel bubble with Singapore won’t start until 2021. The arrangement, initially set for Nov. 22, will be reviewed between Christmas and New Year.

In a sign of how desperate residents of Singapore are to go somewhere beyond the island’s tiny confines, escapes including luxury overnight camping at Changi Airport and daycations at beach hotels at Sentosa, an enclave off the south coast, are booked solid.

Seats on Singapore Airlines Ltd.’s superjumbo-turned-pop-up restaurant in October sold out in 30 minutes, with some paying upwards of S$600 ($450) for a meal in a suite on the stationary Airbus SE A380. And the government has launched its own domestic tourism campaign, with S$320 million in credits set aside to encourage residents to support local businesses.

“It’s obviously disappointing, disappointing for those that had travel to Hong Kong planned, and disappointing for those on the cruise,” said Dale Fisher, an infectious diseases physician at Singapore’s National University Hospital who also chairs the Global Outbreak Alert and Response Network. “But there needs to be an expectation that things can change because we’re trying to do it safely. This isn’t going to have a fairytale ending and we wake up one day and it’s all over.” — Bloomberg