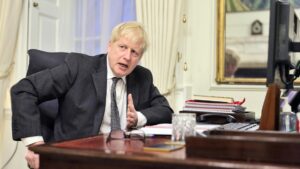 Boris Johnson is to fly to Brussels for an eleventh-hour summit with Ursula von der Leyen this week after two days of Brexit talks between negotiators failed to make any further progress in reaching a deal.

Amid warnings from British officials that a no-deal Brexit was in the balance the prime minister will meet the president of the European Commission. They spent about an hour talking on the phone last night but failed to resolve any of the key remaining differences.

In a joint statement released after the call Mr Johnson and Mrs Von der Leyen said they agreed that the “conditions for finalising an agreement” were “not there”. There remained “significant differences on three critical issues: level playing field, governance and fisheries”, they added.

The pound dropped 0.3 per cent against the dollar as fears grew that London and Brussels would not reach a deal. Before it was announced that Mr Johnson would travel to Brussels it had fallen by as much as 1.6 per cent.

British government sources said that no date had been set for the meeting. It will not take place today and could be held either before or after an EU summit on Thursday. The sources said the timing would be determined by a “joint decision on when it would be the most beneficial”, with the British side understood to be keen on later in the week.

Lord Frost, Britain’s chief negotiator, and his European counterpart, Michel Barnier, are expected to draw up a paper outlining all the “remaining differences” between the two sides. Downing Street hopes this will concentrate the minds of EU leaders on where further movement might be possible.

France has been at the head of a group of countries, including the Netherlands, Spain and Italy, resisting any attempt to give ground on fishing rights or the level playing field. Germany, which holds the rotating EU presidency, Sweden and eastern European states are understood to be keener to find a compromise if European unity is maintained.

“We will have to see whether there will be a political meeting of minds or not,” one British government source said. “But there may not be.”

The decision to hold face-to-face talks — the first time that Mr Johnson and Mrs Von der Leyen will have met since January — came after two days of negotiations between Lord Frost and Mr Barnier failed to make progress on the remaining areas of dispute.

Neither side is understood to have shifted their positions on the extent to which Britain will remain tied to EU environmental, state aid and labour regulations from the end of this year.

In addition, the EU wants to set fishing access to UK waters for a ten-year period with European fishermen keeping more than 80 per cent of the value of British fish stocks. Britain is pushing for a shorter transition of three years.

A government source said: “It’s the end of the road for this process at the level of chief negotiators. We’ve tried this format a lot and it’s clearly not working. We’re basically in the same position we were in on Friday. There are only so many times that we can go round this again and again.”

Another added: “We have made no tangible progress. It’s clear this must now continue politically. Whilst we do not consider this process to be closed, things are looking very tricky and there’s every chance we are not going to get there.”

A European source said that the personal meeting would take place in a positive atmosphere. “The feeling is that we are ready to deal. And more importantly, Boris Johnson is feeling ready to deal,” the source said.

Mr Johnson extended an olive branch to Brussels yesterday by offering to scrap plans to break international law and change his deal. The government said that Britain and the European Union had “worked constructively” to resolve issues around Northern Ireland and that “good progress” was being made.

However, despite the change in position the government pushed ahead last night with plans to reinstate the contentious clauses in the UK Internal Market Bill. The measures are opposed by dozens of Tory MPs.

If agreement on the matter cannot be reached, companies moving goods from Northern Ireland to Great Britain will have to fill out export declaration forms. The UK would also have to follow EU rules on state aid for goods related to Northern Ireland.

Simon Coveney, the Irish foreign minister, said that a deal would require a change in approach. “The next two days need to be very different to the last two days,” he said. “In Brussels certainly the mood is starting to shift to contingency planning for a no-deal.”

One EU diplomat warned: “Somehow both sides seem convinced that the other side will fold in the end and I see none of that.”

Mr Barnier told ambassadors and MEPs during confidential briefings in Brussels yesterday: “We are not far from the very end game but we cannot go further than Wednesday.”