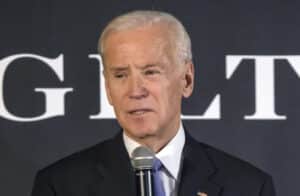 Boris Johnson was always going to struggle to secure a free trade deal with the United States if Joe Biden won the race to the White House.

Last year, after the Conservatives triumphed in the general election, Mr Biden characterised the new prime minister as a “physical and emotional clone” of President Trump.

In September, with the US elections looming, the Democrat fired a warning shot as the prime minister sought to renege on promises made in his Brexit withdrawal agreement. Mr Biden, who is of Irish descent, said the Good Friday agreement could not “become a casualty of Brexit” and any trade deal between Britain and America was “contingent upon respect for the agreement and preventing the return of a hard border. Period.”

Brexiteers say that the freedom to strike bilateral trade deals is one of the main benefits of leaving the European Union. Mr Johnson, 56, has touted a free-trade deal with America as the jewel in the crown of Britain’s post-Brexit trade policy.

Last week, however, the president-elect made clear that the special relationship between Britain and the US does not extend to penning a deal. “I want to make sure we’re going to fight like hell by investing in America first. I’m not going to enter any new trade agreement with anybody until we have made major investments here at home and in our workers,” Mr Biden, 78, said in an interview with The New York Times, published on Wednesday.

“He’s no pure free-trader,” James Watson, of Oxford Economics, said. “Joe Biden’s trade policy promises a more multilateral, but still protectionist, approach. We expect Biden’s trade policy to represent a break with the last four years but not a return to the pre-2016 free trade agenda.”

However, Mr Watson said that the president-elect would seek to “repair ties with traditional allies, particularly in Europe”, probably by scrapping steel and aluminium tariffs imposed early on in Mr Trump’s presidency. “A renewed multilateral approach to trade will mean an end to scattergun tariff threats against allies, as well as some outright tariff cuts that will benefit US industry.”

Trade deal talks between Britain and the US began in May this year. In October, Robert Lighthizer, the US trade representative and Trump appointee, said that the negotiating teams were “making great headway” and suggested that a deal could be done “reasonably soon”. This raised hopes that both sides could put pen to paper soon after Britain had agreed an exit deal with the EU.

Britain has opened up diplomatic channels with the president-elect’s campaign team as well as Republicans and Democrats on Capitol Hill, although formal trade talks cannot resume until Mr Biden is inaugurated in January. However, hopes are now fading that the negotiations begun under Mr Trump will roll over into the new administration.

In his interview with The New York Times, Mr Biden signalled that he would continue with many of President Trump’s aggressive trade policies, such as taking a hard line with China. For this he has bipartisan support in Congress.

The president-elect said that he did not intend to remove the Trump administration’s 25 per cent tariffs on about half of China’s exports to the US. He also said that he would not seek to alter the “phase one” trade agreement signed by the nations last year.

Under the agreement, Beijing promised to buy $200 billion more American goods and services by the end of next year but, as of September, US exports to China were close to 50 per cent below where they needed to be to hit this target.

Mr Biden said that his goal was to “pursue trade policies that actually produce progress on China’s abusive practices” which include “stealing intellectual property, dumping products, illegal subsidies to corporations” and forcing “tech transfers” from American companies to their Chinese peers. “The best China strategy, I think, is one which gets every one of our — or at least what used to be our — allies on the same page,” he said.

Beijing was not impressed. “Some elected officials are competing over who is the toughest on China rather than who can deliver the greatest benefits to ordinary Americans,” an editorial in Global Times, published on Thursday, said. The Chinese state-run newspaper said that “constructive engagement” with “soon-to-be the world’s largest market” was essential “particularly at a time when the US is in a confluence of crises ranging from the coronavirus to economic crisis and profound social and political division”.