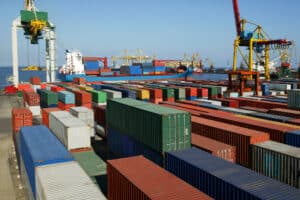 Builders are running short of everything from power tools and screws to timber and roof tiles as the gridlock at UK ports holds up crucial deliveries and sets off alarm bells in the run-up to Brexit.

The UK’s ports have been grappling with a surge in freight volumes at a time when their ability to process it all is hindered by coronavirus restrictions.

Since September, the country’s biggest container port, Felixstowe, has been handling about 30% more goods than usual, with businesses rushing to replenish stock after the end of lockdowns and building stockpiles before the end of the Brexit transition period.

High street chains have already reported shortages of essential goods such as washing machines and fridges, and also toys, as they struggle to get shipments through the Suffolk port.

The fallout from the congestion, which has spread to other major ports including Southampton and London Gateway, is being felt in a number of industries.

John Newcomb, the chief executive of the Builders Merchants Federation, said the ports were becoming a “major issue” for its members. They have enjoyed bumper sales as locked-down Britons renovated their homes but were experiencing availability problems because they “can’t get materials in quicker”. The squeeze was also pushing up the price of goods.

“There appears to be an increasing issue getting products through ports,” Newcomb said. “Rather than taking a maximum of one week to unload, it is taking up to four.”

Timber is of particular concern (the price is up between 20% and 40% because of supply problems in Scandinavia) but there is also a diminishing supply of roof tiles, screws, fixings, tools and white goods such as washing machines and fridges, he said.

In recent weeks the congestion at Felixstowe as well as other ports has encouraged vessels to “cut and run” – either partially unloading or skipping UK calls altogether and dumping cargo at Rotterdam, Antwerp and Zeebrugge instead, said Mirko Woitzik, an analyst at the supply chain risk advisory firm Resilience360. Some carriers are discussing not calling at Felixstowe until February because of fears it will remain clogged, he said.

The shortage of building materials had so far been felt by the retail chains that supply jobbing builders but Newcomb said that, with the situation unlikely to be resolved for several months, it would also become a problem for big contractors. The BMF has raised the issue with the government as the high level of demand has prevented the building trade from stockpiling in the run-up to Brexit.

The coronavirus pandemic has destroyed the equilibrium that usually exists in the maritime supply chain. Robert Keen, the director general of the British International Freight Association, said that over a 10-week period logistics firms went from having no work to a situation where almost no ships were idle. These extremes had led to a “breakdown of the conveyor belt of ships and containers, and the return flow of empty containers”, which was a major cause of congestion, he said.

The resurgent demand has resulted in a fight for space on the container ships that ply the shipping routes from low-cost manufacturing hubs, such as China, to big consumer markets including the US and Europe. UK businesses are reporting stratospheric increases in shipping costs, which are likely to add to the pressure on prices in the new year.

Simon Midwood, the managing director of the family-run building materials supplier Timco, said its shipping costs had increased by more than 300%. That extra cost was pushing up cost prices by between 3% and 17%.

With port delays already causing shortages of popular toy sets such as Barbie, the retailer The Entertainer said it was facing soaring import costs from China, up from $1,000 six weeks ago to more than $6,000.

Gary Grant, the chain’s co-founder, said that could mean higher prices for shoppers in 2021 as retailers struggled to absorb rising costs. The situation was compounded by uncertainty surrounding the import taxes that will apply after Brexit, he added.

Last month the Guardian revealed that 11,000 containers of government-procured PPE were part of the problem at Felixstowe. That backlog has been reduced to about 4,000 and should be cleared by Christmas. The port said it expected the increase in container volumes to last into January but was “working hard to minimise the impact on daily operations and to maintain vital supply chains”.