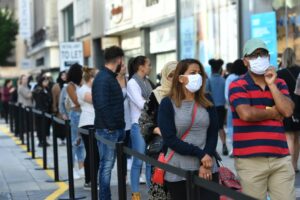 When website developer Nathalie Alpi heard England was going into another month-long lockdown at the start of November, she was immediately worried for her friends running independent shops around Bristol.

“I knew they would be missing all that footfall at one of the most important times of the year – and I just didn’t know how they would survive’,” Alpi said.

Instead of wringing her hands, she and her husband took action – creating a virtual high street for independent traders, Shop Here Not There. “It’s a gift to all of the small independent shops of Bristol,” she said. “It’s not a business, it’s really just there to help.”

The site is one of several popping up across the UK as bricks and mortar retailers have been forced to develop online strategies overnight. In November, Bookshop, a socially conscious alternative to Amazon, launched in the UK, while British company Hive offers a similar service, allowing shoppers to support a local bookshop at checkout. The indie music industry launched Love Records Stores in March to help out traders. Other websites are less conventional – every small business listed on Not On The West End is run by someone who usually makes their living in UK theatre.

The cavalry may also be arriving for small traders, albeit belatedly, in the form of a proposed nationwide local shop site run by the British Independent Retailers Association (Bira). It would be run “to enable retailers to effectively sell online to their local markets, not for huge amounts of profit”, says the Bira CEO, Andrew Goodacre.

Independents certainly need the help. According to recent data from the Local Data Company, shopping footfall during the first lockdown was down by 80%. After reopening, it remained 35% down on a year earlier.

But the desire to keep independent shops open is robust, recent research suggests. Working from home has kept people – and their spending – local. A survey carried out by Visa for Bira found that while three in five shoppers were worried independent businesses would not survive, four in five said they were shopping local as much as or more than before the pandemic.

Other decentralised, hyper-local sites created on a shoestring are already popping up across the country.

In Oxfordshire, Locally UK reported a rise in traffic from 20,000 page views a month to 120,000 during lockdown. The site charges 7% plus 20p and pays businesses instantly, whereas fees on larger sites such as Amazon and Etsy can reach 15-20%, says its managing director, Darren Townsend. “I think this year will tip many independent businesses over the edge,” he adds. “But one thing that you find with small businesses is they’ve got such a passion to keep going. And when small business are working and supporting each other, they do pull each other through.”

In the North of England, towns are queuing up to use the free Totally Locally open source marketing kit. In September, Hebden Bridge became Totally Locally’s first local site to give shoppers the chance to buy from multiple local shops with one online checkout and 30 towns are on a waiting list, says founder Chris Sands.

“You can’t just put a sticker on the window, say shop local, and expect everyone to change their mind and do it,” he says. Instead, Totally Locally’s in-depth kit helps local traders create brands and change habits; it’s free, all they ask is if you have an idea that works you share it. “We call it the economics of being nice,” he says.

The site has made a big difference, says Jim Leach, the co-founder of bespoke plywood kitchen maker Wood & Wire based in the Yorkshire town. “A lot of people are putting a lot of effort into getting these things up and running,” he says. “But ultimately people have just got to use it so the ecosystem becomes sustainable.”