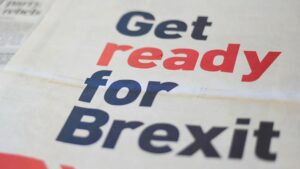 Foreign homebuyers could be blocked from getting a mortgage at one of Britain’s banks after Brexit.

As of 9pm last night, all new residential and buy-to-let mortgage applicants at Santander will have to be a UK resident, making it the first big lender to confirm changes before the end of the transition period on December 31.

Santander will also require existing borrowers who live in the UK but are foreign citizens, and who have a deposit or equity of less than 25 per cent and use their income to borrow money, to prove that they have the right to live permanently in the UK if they are a citizen of the European Economic Area (EEA) or Switzerland.

This applies to foreign citizens taking out a joint mortgage with a UK citizen.

The rules exclude borrowers from the Republic of Ireland, but not the rest of the EEA, which includes EU countries and Iceland, Liechtenstein and Norway. The requirement will also apply for buy-to-let applicants who are required to prove they earn at least £25,000 a year.

The bank will only consider an application if the non-UK citizen intends to live in the property after completion, or regularly spend weekends there, or if it is going to be lived in full-time by a family member.

The evidence can be proof of settled or pre-settled status as part of the EU settlement scheme, which is open for applications on the government’s website until June 30, and is restricted to anyone who started living in the UK before December 31 this year.

The government has said that EU citizens will need to apply for settled status if they have lived here for five years or more, or pre-settled status if they have lived here for less than five years, to demonstrate their right to stay in the UK. “Where borrowers haven’t started the right to reside process and have less than a 25 per cent deposit, then there will be an issue,” said Mark Harris from the mortgage broker SPF Private Clients. “We expect to see more lenders clarify their position on this.”

The changes come as lenders are being told to get ready for the end of the Brexit transition period, when new rules will apply to businesses and citizens — not all of them yet confirmed.

You can fill out a survey on the government website, at gov.uk/transition, to find out how you might be affected.

In theory, foreign borrowers should still be able to get mortgages, as long as they have permanent residency and their main home is a UK address, but the need for extra checks means that applications could take longer to underwrite.

Santander said: “Our recent changes will ensure that we are meeting our legal and regulatory obligations as a mortgage lender.

“To continue helping as many customers as we can, EU citizens who are resident in the UK before January 1, 2021 will be treated as having permanent rights to remain in the UK for the purposes of our mortgage assessment.”