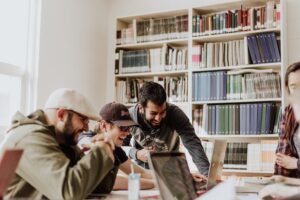 Starling Bank has had its forward-tech thinking banking approach rewarded this year, becoming the first digital bank of its kind to make profit.

I have to admit that on a personal level I’ve watched the tech world take over the traditional banking methods with absolute glee. When fiat currencies have been rife for years it made no sense to have such antiquated systems of work running the customer experience. None, whatsoever. For someone to march in and declare that it was time to challenge the status quo was a breath of fresh air. Showing the world that change against enormous adversity can be achieved with room for true expansion with a secure business ethos moving forwards. All hail Anne Boden, CEO and Founder of Starling. Note needs to be made to her every day for doing something that the millions of us just sat at home thinking: ‘well wouldn’t it be nice if …’

Starling Bank has attributed this success to a strong momentum in customer accounts and revenues, coupled with a stable opex base. With nearly 1.8 million accounts, c.£4 billion in deposits and c.£1.5 billion of lending, Starling expects to be profitable on a monthly basis going forward as it continues to grow and gears up to scale across Europe.

Whilst Covid caused serious disruption to many of their clients, Starling’s systems are all online which meant that they were able to adapt very quickly, listen to customer feedback and win new clients.

Rivals, Revolut and Monzo posted losses and spoke openly now of their growth trajectory and plans to shift their focus and strategies from awareness to profit in order to break even and profit ones. As high street banks race to innovate and create new apps they have lost their status as stalwarts of society and are viewed now as a time costing exasperation.

In fact, Starling is winning more customers than any other UK bank through their Current Account Switch Service. In the second quarter of the year, they recorded the highest switching gains of any bank in the UK with nearly 12,000 customers switching to them on a net basis. 2020 has also seen them topping the Which? customer satisfaction table with an overall score of 88% and recommended provider status for the second year in the row.

In terms of how and why they’re storming their marketplace, it has a lot to do with Anne Boden’s initial pitch which still rings true today. It’s a powerful message and one which every SME business owner needs to read and re-read again until their mantra for change becomes a mantra for their own companies. Cut and paste this comment and apply it to your own business in 2021 …

‘We’re not like most companies where change is seen as a risk, so everything is done to minimise change. To us, the biggest risk is standing still and not changing.

The reason Starling keeps powering on is that we don’t think like a bank. As per my original pitch, we are a technology company. Today, banking is seen as a tech business. Starling has played a huge part in making that happen.’

Starling generated total operating income of £9.0m for the month of October 2020, which represents an annualised revenue run rate of c.£108m. This figure is split £5.5m of net interest income and £3.5m of gross fees and commissions income.

This is a 4x increase in revenue compared to 12 months ago, and a c.30% increase from Starling’s last trading update 3 months ago. Interest income continues to be supported by strong growth in lending volumes, particularly the extension of government-backed lending schemes.

Interchange income continues to perform well, having increased over 20% between July and October 2020, despite the increased COVID-19 restrictions put in place around the country in recent months. This is the result of strong primary account growth, as well as increased customer engagement and card spend. The vast majority of our transactions continue to occur domestically with international spend declining after a strong recovery over the summer months.

‘We’ve continued to launch new products to the market, including chargeable subscription features such as the SME Toolkit and Kite card. While there has been strong uptake of these products, they are still a small contribution to operating income relative to interest income and present further upside to revenues and profitability in the future.’

‘Our goal has always been giving our customers the bank they tell us that they want and one which puts them in control of their money and their data. We know exactly what our customers want too, because they tell us every day. We’ve always welcomed and encouraged the interaction. Their suggestions, positive and negative, help us stay ahead of the curve when it comes to new product development. Plenty of Starling’s premium products you now see are as a result of someone getting in touch and saying: wouldn’t it be great if …?’

In terms of 2021, Starling are looking to scale their offering across Europe. Anne continued:

‘We’ve learned new and better ways of working in this most unusual and difficult of years. I fully expect there will be long-term improvements to the world of work in banking and elsewhere once a new kind of normality resumes.

‘I’m equally certain that we will become a formidable competitor in the European banking market as we gear up to scale across Europe. We know that our technology is hugely scalable because our tech team runs a constant simulation at around ten times our current capacity. We’re prepared for a sudden influx of customers and transactions. In fact, we’re prepared for pretty much anything.’

I think there are many valuable lessons that Business Matters readers can learn from the Starling ethos and journey. Crucially at this moment in time, as 2021 strategies are being researched and composed, I will every reader to read and re-read Anne’s quote above on how they view change.  Every business has had to deal with the reality of this during 2020 and hopefully many of you have been quick to adapt and conquer. Moving forwards if you spend time doing a SWOT analysis for the past twelve months and ‘not adapting to change quickly enough’ comes up, you know that it needs to be looked at for the next year. Call it ‘innovating in 2021’ if that sits better with you and your team, either way, to innovate means growth towards a brighter future for your team, company and goals. It can be incredibly empowering … and that will be my next article.

Rishi Sunak will speak to his cabinet about rail strikes today after a union announced days of extra strikes over Christmas in the long-running...

Tory peer Baroness Michelle Mone will take a leave of absence from the House of Lords with immediate effect. Baroness Mone is at the...