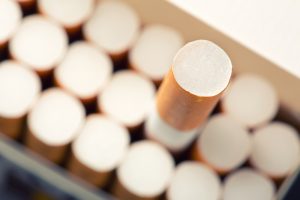 London’s been burning since tobacco sales shot up in England in the wake of the Covid-19 pandemic.

Tobacco companies claim that lockdowns and travel restrictions have been good for business, because smugglers have a harder time transporting contraband across national borders. But seeing as how 60-70% of the parallel trade in tobacco is driven by firms linked to the industry, tobacco control advocates point out the tobacco companies themselves are the main beneficiaries of tobacco smuggling – and of making sure the illicit trade in cigarettes is not effectively policed.

Given that Big Tobacco profits from legal packets as well as the parallel trade, the black market allows them to access underage and less well-off smokers. Increasingly rigid public health measures are bad for the industry’s bottom line, and it should come as no surprise that companies like Philip Morris International (PMI) and British American Tobacco (BAT) are willing to go to extraordinary lengths to protect their profit margins. That said, if this illicit tobacco trade is able to take place in what effectively amounts to broad daylight, then the consequences are equally the fault of the industry and of governments in the UK and the EU, who have failed to recognise the industry’s stratagems to undermine their tobacco control measures.

As an investigation by the Organised Crime and Corruption Reporting Project (OCCRP) laid out earlier this year, the Big Four tobacco companies – PMI, BAT, Imperial Brands, and Japan Tobacco International (JTI) – have combined forces since 2010 to create and hawk a deliberately faulty track-and-trace system for tobacco products. This traceability Trojan horse, which was originally offered to governments worldwide by the tobacco industry-controlled Digital Coding and Tracking Association (DCTA), was sold to a company named Inexto for a symbolic sum of one Swiss franc in 2016 and continues to be commercialised under the name ‘Codentify’.

The Codentify system has been declared defective by industry experts, since it relies on a 12-digit code which is visible for all to see and doesn’t possess physical security features which protect it from damage. Codentify also works by verifying a code with a data bank, but is not able to show if a code has simply been copied or stolen and duplicated on an untaxed pack. Beyond simply being easily compromised, the system’s origins mean it also goes entirely against Article 5.3 of the Framework Convention on Tobacco Control (FCTC) of the World Health Organization (WHO), which states any track-and-trace system put in place by FCTC signatories must not be linked in any way to the tobacco industry or its chosen partners.

Sadly, seemingly distracted UK and EU regulators have allowed this particularly sly fox into a lucrative henhouse, practically ensuring efforts to stamp out the €10 billion European black market in tobacco will come to naught. With the tobacco majors obscuring the origins of Codentify’s faulty technology via companies whose links to the industry are not immediately apparent, many of those companies have been able to secure key contracts within both the British and European tobacco track and trace systems. Those firms include French-based Atos, which has been named in the paper trial of Codentify since its inception and yet snatched up a role in the UK traceability regime as a subcontractor to the British company De La Rue.

A historic British brand, De La Rue – which found itself in difficult straits after losing its contract to produce UK passports – seems to have found its salvation by getting in on the track and trace action. De La Rue is now doing exceedingly well selling tobacco traceability services, successfully winning the UK bid in February last year and a comparable tender in the United Arab Emirates as well. However, by subcontracting the £3.5 million contract with Her Majesty’s Revenue & Customs (HMRC) to Atos, has De La Rue made itself into yet another cog in Big Tobacco’s machine?

Indeed, a look at the company’s shareholders indicates De La Rue’s tobacco industry ties are no accident. Rather, De La Rue plc’s largest individual shareholder is Brandes Investment Partners, which control 10% of shares in De La Rue. The same Brandes Investment Partners, in publishing the results of their Q3 2020 activities in early October, revealed they own shares of the tobacco company Gudang Garam in Indonesia, an affiliate of British American Tobacco in one the largest global markets for tobacco products. As such, De La Rue’s largest single shareholder appears to have a major conflict of interest between an effective tobacco control system and tobacco industry profitability.

All of this casts a shadow not just over tobacco control in the UK – which had until recently a strong track record for tobacco policy – but the world over, since every successful government tender serves as a marker of legitimacy in putting forward future bids. The situation is hardly better across the Channel, where experts decry the industry’s level of influence over the EU’s traceability system and the FCTC itself have highlighted a laundry list of problems undermining the system’s effectiveness. Even when the EU system does find examples of wrongdoing in the supply chain, fines for tobacco tax fraud in Sweden are just one Euro. In Germany, there is no penalty at all.

The consistent undermining of the WHO’s FCTC and its Protocols (which specifically say any interests linked to the tobacco sector, as Atos and DLR both appear to be, are not to be allowed into the tobacco tracing regime) has put the FCTC Secretariat, headed by Dr. Adriana Blanco Marquizo, on high alert. The EU’s track-and-trace system is just the most obvious and prominent example of these failings; the bloc not only loses €10 billion in government revenues every year, but also 700,000 lives to smoking-related diseases per year.

If left unaddressed, this backsliding and growing industry influence could fatally undermine the most effective policy for reducing tobacco use and improving public health – raising prices through taxes.