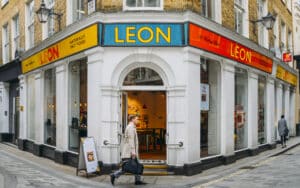 Leon has appointed advisers to launch a company voluntary arrangement as the self-styled natural fast-food chain seeks to cut its unsustainable rents.

The group, co-founded by Henry Dimbleby, the prime minister’s “food tsar”, has hired Quantuma, a business advisory group, as it continues to suffer a sharp fall in customer numbers as tough Covid-19 restrictions are imposed nationwide.

In particular, it highlighted its exposure to the scarcity of city centre workers, notably in London, where there was also a decline in tourist trade. In the second lockdown, it suffered a 70 per cent fall in sales.

Quantuma said that the Leon CVA “delivers no cuts to existing staffing levels and preserves the majority of the firm’s store footprint”. It said that the controversial insolvency measure was “focused upon ensuring the business can deal with the challenges it is faced with, the uncertainties created by the pandemic and providing a platform to return to a more positive trajectory”.

Leon was launched in 2004 by Mr Dimbleby, 50, a former Bain & Company consultant, in partnership with John Vincent, 49, who remains its chief executive, and Allegra McEvedy, 50, the chef. It has about 75 restaurants in Britai, as well as in Washington, Oslo, Amsterdam, Dublin, Rotterdam and Gran Canaria.

Mr Vincent said: “The CVA is intended to provide the company with a foundation to first survive and then carefully rebuild. We had a growing and profitable business before Covid . . . Continued lockdowns and restrictions have made this CVA a necessity.”

Read more:
Leon looks to CVA to help it through lean times