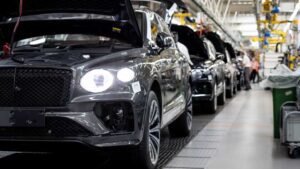 Bentley has lined up five cargo planes to fly in car parts if there is disruption at the UK border in the event of a no-deal Brexit, in a marker of the deep concerns facing motor manufacturers as trade negotiations continue.

Companies from across the economy have expressed concern that imports could be disrupted for weeks if the UK and EU cannot agree a deal before 1 January, when the Brexit transition period ends.

Adrian Hallmark, Bentley’s chief executive, said the firm had five 747 cargo planes on standby under a timeshare arrangement to avoid ports, which could quickly become congested if there is a cliff-edge change in trading rules.

Bentley, which is owned by Germany’s Volkswagen, the world’s largest carmaker by volume, has spent millions on preparations for Brexit, according to Hallmark.

Carmakers typically try to avoid using air transport because it is much more expensive than land or sea, but they do occasionally use planes to ship parts when there are urgent requirements.

Jaguar Land Rover, the UK’s largest carmaker, said in February that it had flown in some vital key fobs from China in suitcases when the start of the coronavirus pandemic caused shortages.

For the most part the UK’s logistics network passed the test posed by the pandemic, but all traffic moving across the Channel will face new paperwork whether a deal is agreed or not, while carmakers including Bentley also need to invest heavily to develop new electric cars.

Bentley, whose factory is in Crewe, Cheshire, has also looked at routeing imports through two other ports aside from Dover, including Immingham in Lincolnshire.

Stockpiling parts in extra, rented warehouses is another way that Bentley and other car companies are trying to avoid stopping production. Bentley now has the parts to cover 14 working days of production without new supplies, up from the two days of stock it usually holds.

Bentley only makes about 11,000 cars per year, meaning that stockpiling and flying in parts – while expensive – should protect it from the worst of any disruption. These are much less appealing options for large-volume carmakers such as Jaguar Land Rover or Nissan, whose Sunderland factory is the largest in the UK and can produce more than 1,300 cars a day.

Hallmark said disruption at ports would be more damaging to Bentley than 10% tariffs, which would kick in on 1 January if there is no deal and trade defaults to World Trade Organization terms.

He said the company would try to find the “least worst balance” between raising its prices and absorbing some of the costs itself. Bentley cars start at £130,000 and special models can cost more than £1m, meaning it can absorb some extra costs in its thick margins.

For larger-volume, lower-margin carmakers, tariffs would be a disaster. Nissan has said tariffs would make its UK business model unsustainable, while PSA Group’s chief executive has said the future of its Vauxhall plant in Ellesmere Port, Cheshire, hangs on getting a good Brexit deal.

UK car industry forecasts suggest a no-deal Brexit would cost the sector £55bn by 2025 because of lost production.