FACTORY ACTIVITY in the Philippines inched closer to stabilization in November, after output rose for the first time in five months and the rate of job losses slowed, a survey conducted by IHS Markit showed.

The IHS Markit Philippines Manufacturing PMI improved to 49.9 last month from 48.5 in October to post the second straight month of deterioration, nearing the 50-neutral mark that separates it from expansion.

“The latest reading signalled a movement towards stability and was the highest since September,” IHS Markit said in a press release on Tuesday. 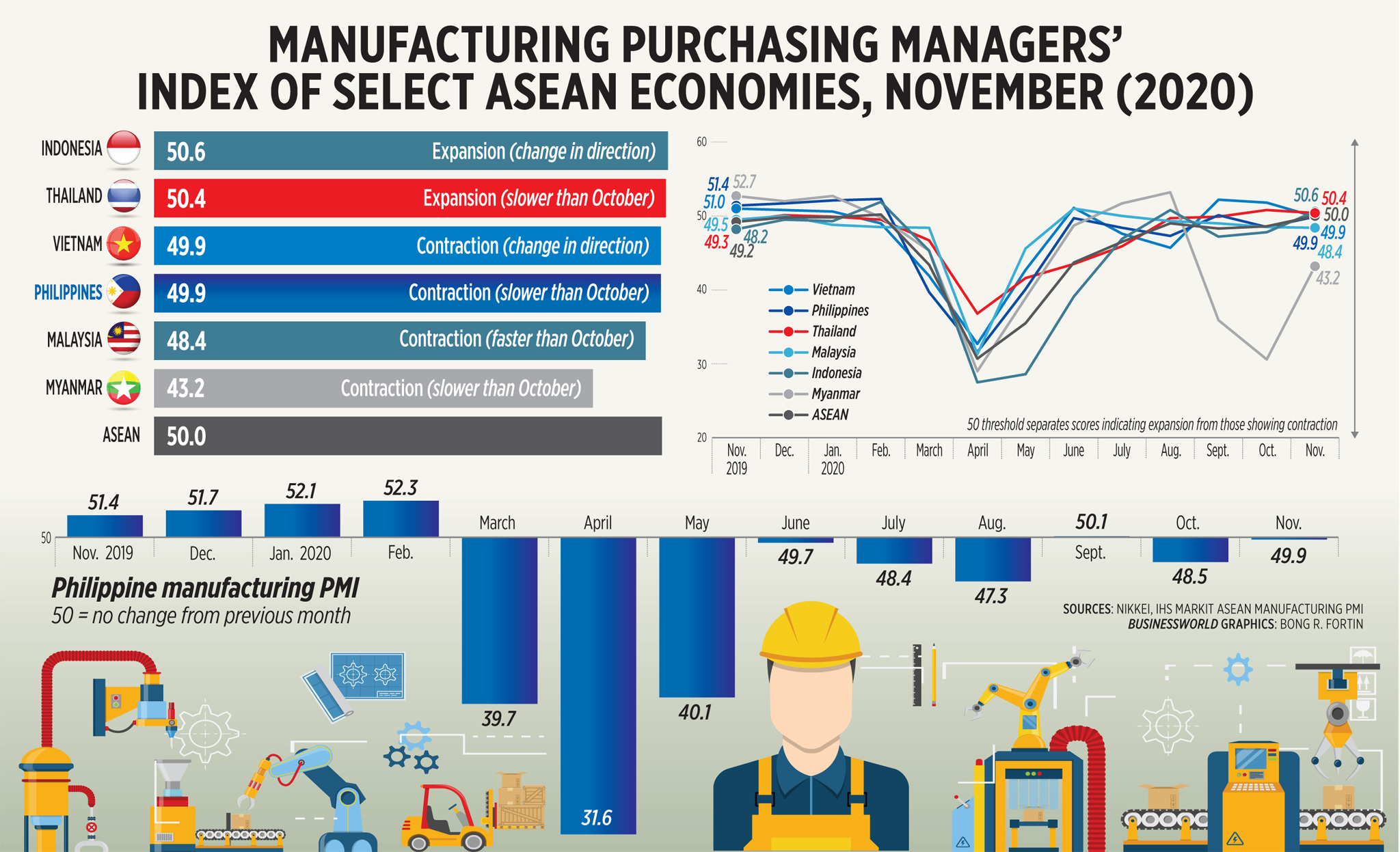 This marked the eighth month this year the country saw worsening conditions for its manufacturing sector due to the pandemic.

The Philippines joined the broad improvement across the Association of Southeast Asian Nations (ASEAN) region after most countries either continued to record expansion or inched up closer to the stability, bringing the regional average to 50.

The Philippines and Vietnam recorded the third-lowest reading among the six countries tracked, with Indonesia claiming the top spot (50.6) followed by Thailand (50.4). Myanmar was in last spot (43.2).

The Purchasing Managers’ Index (PMI) is the weighted average of five sub-indices, namely: new orders (30%), output (25%), employment (20%), suppliers’ delivery times (15%) and stocks of purchases (10%). Overall readings above 50 signal expansion on a monthly basis while those below that mark denote contraction

The improvement in Philippine factory activity was mainly attributed to the rise in output levels for the first time since June as more businesses reopened and the decline in new orders slowed.

“The Filipino manufacturing sector showed promising signs of renewed recovery momentum in November as the headline PMI figure neared stabilization. Production rose for the first time since June as foreign demand improved notably from that seen in October,” Shreeya Patel, economist at IHS Markit, said in the statement.

Overall demand improved in November, even as there was a continued reduction in new orders.

However, Philippine firms continued to lay off workers despite the higher output, the survey showed, although it “eased considerably” from October.

Manufacturers also trimmed inventory in November as their stocks are enough for new orders and future demand remains uncertain.

Despite looser mobility restrictions in the country and abroad, firms continued to see supply chain disruptions midway through the fourth quarter, reporting longer delivery time of inputs every month since August 2018.

Overall costs went up due to higher prices of raw material and transportation, with some firms increasing their selling prices. Other firms sold their products at a discount to attract more customers while demand remains weak.

The companies surveyed were fairly optimistic for the next 12 months.

“Nevertheless, the path to recovery may not be smooth. The health of the sector rests on the number of COVID-19 (coronavirus disease 2019) cases and the impact the virus has on the global economy. Whilst vaccine developments look promising, it is still unclear when restrictions will come to a complete end,” Ms. Patel said.

Any sign of improving conditions for the manufacturing sector is good but it would need to be sustained in order to see a clearer picture of recovery, said Filomeno S. Sta. Ana III, the coordinator at the nongovernment organization Action for Economic Reforms (AER).

Mr. Sta Ana said factory activity may further improve ahead of the holiday season, but containing the virus will be key to a sustainable economic recovery.

“We have to keep focusing on how we contain COVID-19. That’s the lesson from countries that have been able to flatten the curve. Flatten the curve and economic recovery will follow,” he said in a Viber message Tuesday.