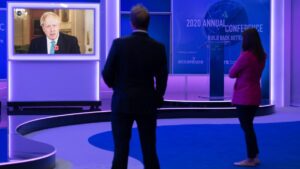 Britain’s leading business lobby group “must change” as the country leaves the European Union and grapples with the economic cost of coronavirus, according to its new director-general.

Tony Danker, who starts at the CBI today, is calling for an overhaul of its relationship with Downing Street after turbulence since the Brexit referendum.

Writing in The Times today, he argues that the pandemic amounts to a “wake-up call” for the UK, which must “grab this moment” and boost productivity and invest in innovative industries.

Last month Dame Carolyn Fairbairn, Mr Danker’s predecessor, acknowledged that Brexit had “broken” the CBI’s ties with the government and there remained a “way to go” before it was fixed.

Boris Johnson, who shelved a scheduled speech to the organisation’s annual conference this month, insisted in a brief, pre-recorded video that the door of No 10 was “always open” to the group.

Relations between the CBI and the government have been strained since 2016. During the EU referendum campaign, it warned that leaving would trigger a “serious economic shock” and could imperil up to 950,000 jobs.

“Like every organisation, we have spent the last few years dealing with crisis, helping businesses stay afloat,” Mr Danker writes. “But the world in 2021 is on the cusp of a new era, and like business itself, we must change to meet it. That means it is time to set aside old differences and forge a new relationship with government. It means business and government working together to build the most competitive economy in the world. And, at the CBI, it means doing everything in our power to help business help Britain.”

The CBI positions itself as the voice of corporate Britain, speaking for 190,000 businesses. Many of these are represented by trade bodies, however, and it does not disclose its member numbers.

It has endured a fractious relationship with Mr Johnson’s administration. This year unnamed aides argued that groups including the CBI had failed to prepare their members for Brexit.

Mr Danker is a former government adviser and head of the industry-led Be the Business productivity campaign.