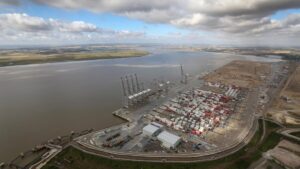 Europe’s biggest battery storage project could be built in Essex after the government granted consent for the £200 million development.

Intergen, which is co-owned by a Chinese state utility group, plans to build the giant battery at a site on the Thames estuary near Stanford-le-Hope by 2024.

Finding a cheap and efficient way of storing electricity is seen by many onlookers as a holy grail for the energy sector since it could enable wind and solar power to be saved and used around the clock, even when power is not being generated.

The costs of lithium-ion batteries, such as those used in mobile phones and electric vehicles, have fallen by more than 80 per cent over the past decade. This has helped to spur the deployment of industrial-scale battery storage sites that connect with Britain’s power grid, typically comprising rows upon rows of lithium-ion batteries housed in shipping containers. The largest battery project in Britain is believed to be a 50MW project in South Yorkshire.

With the UK committing to quadrupling its offshore wind capacity to help to hit climate targets, businesses are eyeing the potential to deploy large-scale batteries. Intergen, based in Edinburgh, owns a series of power plants in Britain and Australia, including the Coryton gas-fired power station near to the proposed Essex battery site. Intergen is 50 per cent-owned by Seven, a Czech company, and the other 50 per cent by two Chinese groups: China Huaneng and Guangdong Yudean.

China Huaneng, a state-owned company, is already involved in building another battery at Minety in Wiltshire that is expected to be Europe’s largest when it is completed by the end of this year, with a 100MW output and 100MWh capacity, and it plans for a further 50MW to be added next year.

Chinese involvement has come under increased scrutiny with the government deciding to remove Huawei from Britain’s 5G networks and concerns over Chinese state nuclear groups’ involvement in building reactors.

Jim Lightfoot, 54, Intergen’s chief executive, said that its Chinese co-owners were members of its supervisory board but did not “involve themselves on a day-to-day” basis.