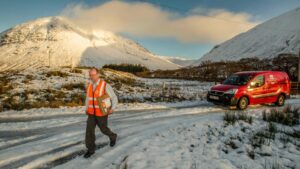 The postal regulator appears to have cleared the way for the government to relax the statutory commitment of Royal Mail to deliver six days a week to all addresses in the UK.

An Ofcom review of Royal Mail’s universal service obligation, enshrined in law, found that most homes and businesses will experience little impact in cutting deliveries to five days a week.

However, postal workers and consumer groups are strongly critical.

Dave Ward, general secretary of the Communication Workers Union, fearing the loss of thousands of jobs among its Royal Mail members, said: “At a time when postal services have never been more essential and we should be investing in our national infrastructure, we should be looking for ways to protect and enhance a six-day universal postal service, not for reasons to cut it back.”

Alistair Cromwell, acting chief executive of Citizens Advice, said: “We must be cautious about making swift judgments about the long term during the pandemic. We don’t want to see the start of a slippery slope in reductions to the service.”

An investigation by Ofcom found that going to a five-day service would meet the needs of 97 per cent of households and small businesses.

By losing Saturday deliveries, Royal Mail could save between £125 million and £225 million a year in costs, Ofcom said. However, it added that Royal Mail needed to get its act together.

Royal Mail letter volumes have fallen 33 per cent during the pandemic though it remains just as busy as parcel volumes, swollen by the rise of online shopping, are up 31 per cent. It said in the six months to the end of September its UK business lost £180 million.

Any decision is in the hands of Alok Sharma, the business secretary.

Read more:
Royal Mail could be about to drop Saturday post