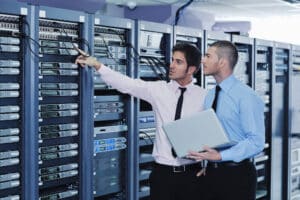 RAID systems are popularly used to gain improved performance and better data security. This system is designed by connecting multiple drives to increase storage capacity and achieve data redundancy. Redundant Array of Independent Disks (RAID) systems have superior computing capabilities because it comprises multiple hard disks that are connected to a single logical unit. ‘Redundant Array of Independent Disks’ (RAID) servers are categorized as RAID 0, RAID 1, RAID 5, RAID 6, and RAID 10. All these different RAID levels have different configurations and features.

RAID is most commonly known for providing data redundancy. It means that it allows storing data in two separate locations to create fault tolerance. This feature helps in protecting data if one drive fails until other drives fail too.  RAID server works as one single operating system that distributes data over all disks. Most RAID servers offer a certain level of protection but the technology doesn’t guarantee complete data security. Whether you’re using G-RAID or any other model, all are mechanical devices vulnerable to damage. This technology offers redundancy but in the end, all RAIDs comprise hard drives that are susceptible to failure and data loss. The data stored on your RAID arrays may become inaccessible or lost due to the following reasons.

The RAID controller is responsible for managing all the hard drives in the system. Mostly, RAID suffers data loss due to the malfunctioning of this controller. RAID Controller may get damaged due to power surge or other mechanical faults. To avoid this issue, make sure to use a surge protection device and avoid rebooting the RAID when you encounter this issue to avoid data overwriting.

An incorrect build-up of the RAID volume could lead to a system breaking down and data loss. A RAID rebuilds with an error in configuration setting or missing hard drive will result in making data inaccessible. Likewise, upgrading the software could also lead to sudden data loss. RAID technology is considered reliable for protecting valuable data, but it is a piece of machinery that can get damaged and suffer data loss. Only specialists like G-RAID data recovery professionals can handle this complex device and recover lost data.

Besides accidental data deletion, power surge, and malware, RAID arrays could also sustain physical damage that leads to data loss. RAID comprises hard drives that are prone to physical damages. For instance, when the drive’s head gets in direct contact with the drive platter, it causes wear and tear. Your RAID server could also sustain water or fire damage that results in data loss.