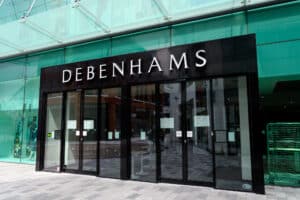 Up to 60 Debenhams shops could close next year, putting thousands of jobs at risk, as part of a rescue deal for the beleaguered department store group.

Shares in JD Sports fell more than 6% on Tuesday after it emerged the company was in exclusive talks to buy Debenhams, in a move that would take the sports and casual wear group into a tough new market.

JD is thought to be mainly interested in the Debenhams website but analysts also believe it could take on almost half the group’s 124 outlets. That would be in line with a restructuring plan set out by the owners of Debenhams in a pack for potential buyers, under which the business set out the possible closure of between 20 and 60 stores over time.

While other retailers – including John Lewis, Next and Marks & Spencer – may be interested in a limited number of the unwanted Debenhams outlets, the possible closures would put thousands of jobs at risk at the group, which employs 12,000 people.

Debenhams has been considering a potential sale since the summer after going into administration in April, for the second time in a year.

A deal could be announced before Christmas, but any decision on store closures and related job cuts is not likely to come until after the festive trading peak.

Analysts and industry insiders expressed surprise that JD would want to take on a vast amount of high street space when shoppers were increasingly switching online. JD has a significant high street presence, operating its core sports chain as well as the fashion retailer Scotts and the outdoor wear businesses Blacks Leisure and Millets.

A deal may not materialise. Other potentially interested parties, including the online specialist The Hut Group, which is understood to have been interested in the website only, and India’s Reliance Retail, appear to have melted away. Offers from Debenhams’ most persistent suitor, Mike Ashley’s Frasers Group, have so far fallen far short of its owners’ hopes.

If JD did secure a deal, it’s thought it would need to either split up stores or partner with other businesses that have expertise in beauty, catering, homewares and other kinds of goods sold in department stores to make the deal work.

“It’s difficult to see how JD would fill that space,” said one industry insider.

One analyst pointed out that JD would have to spend heavily to improve the look of stores and that the venture was unlikely to go down well with investors.

However, Greg Lawless, an analyst at the stockbroker Shore Capital, said Debenhams was a market leader in premium beauty, owned some decent fashion brands, including Maine and Mantaray, and could be much more efficiently run by JD. He added that the business was likely to contain as much as £500m of stock ahead of Christmas, giving it assets well above the asking price.

While the potential deal carried execution risk, Lawless said that as a “best-in-class” retailer JD would “be able to operate the Debenhams fascia much more efficiently and potentially harvest significant margin opportunities”.

Another motivation for JD’s boss, Peter Cowgill, might be to foil or raise the price of any takeover of Debenhams by Mike Ashley’s Frasers Group, which owns its key rival Sports Direct as well as the designer fashion chain Flannels and department store House of Fraser.

Ashley has made no secret of his desire to control Debenhams, where he spent £150m building a stake when it was a listed company only to see that wiped out in a debt restructuring deal with the department store’s lenders.

Frasers was due to hold talks about about a potential deal on Monday before exclusivity with JD was agreed. Ashley is thought to have been offering only about half the minimum £300m price tag its advisers are seeking.

Read more:
Debenhams may close up to 60 stores, putting thousands of jobs at risk