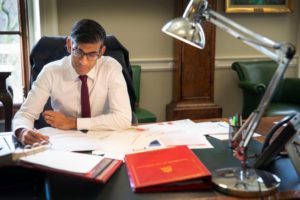 Rishi Sunak says the spending review comes as the coronavirus health emergency is not over and the economic emergency has only just begun.

Sunak said he will prioritise jobs, businesses and public services, the chancellor says the government is spending £280bn to get the country through Covid-19.

Next year, the government will allocate an initial £18bn in response. There will be £3bn for the NHS, £2bn for keeping transport running, £3bn to local councils, and extra £250m to end rough sleeping. Total funding to tackle coronavirus will be £55bn, he says.

Sunak said that a new “levelling up” fund worth £4bn is being set up. It will be managed by the Treasury, the transport department and the communities department.

It will take a holistic approach, he says. Projects must command local support, including from MPs.

This will fund what people and places need, he says.

The other main highlights from the announcement were:

Infrastructure and levelling up

Responding to the Chancellor, Anneliese Dodds, the shadow chancellor said “earlier this year the chancellor clapped for key workers. But now he is making many of them face a pay freeze.”

She added this will take money out of the economy.

In contrast, there has been a bonanaza for firms getting contracts from this government. Firms with government connections have been 10 times as likely to get a contract as others, she says.

She accused the government of  waste “on an industrial scale” and said that the decision to ignore Labour’s call for a short, circuit breaker lockdown, and to have a month-long one instead, has cost the economy £12bn.