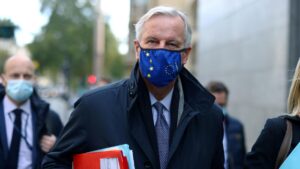 A Brexit trade, security and fishing deal could be in sight early next week as Michel Barnier, the European Union’s chief negotiator, prepares to come out of coronavirus quarantine for the final round of talks.

Negotiators continued line-by-line talks on a draft legal treaty text yesterday as talks enter the last stage. There was an outbreak of the virus in the European team last week.

While opening a new customs facility at Dublin port yesterday, Micheál Martin, the Irish prime minister, said that negotiators were working on “texts now in all areas” and the EU’s assessment was the most hopeful to date.

“The fact is that engagement has continued, and it’s fair to say the engagement has been of an intensive nature now for some weeks,” he said. “I would be hopeful that by the end of this week we could see the outline of a deal.”

Mr Barnier is expected to be given the all-clear to head to London for the last round of talks with Lord Frost, the chief British negotiator. “Time is short. Fundamental divergences still remain but we are continuing to work hard for a deal,” Mr Barnier said.

Talks between Lord Frost and Mr Barnier will take place over the weekend with the aim of reaching a fishing agreement early next week. While the two sides were still apart on “level playing field” competition rules and fisheries last week, negotiations are on legal texts and deep into detail, including the numbers on future fishing quotas. The slow pace of negotiations on a legal text, predominantly caused by the EU’s refusal to work on drafts until late last month, is causing internal problems in Brussels. Deadlines for the European parliament to ratify the treaty, which must be translated into all 24 EU languages first, have come and gone.

To prevent a no-deal cliff edge, EU leaders and the parliament must ratify the agreement before the transition period expires at midnight on New Year’s Eve. MEPs will now vote via an online video link on December 28, meaning that the draft agreement must be ready for next week or early next month at the latest.

Speaking to the House of Commons public accounts committee, Alex Chisholm, permanent secretary at the Cabinet Office, said that deadlines were “not as hard and fast as we had thought” and that there was still “undoubtedly time for a deal to be agreed”.

He warned, however, that trader readiness was marked “red” and that under present projections businesses were not expected to be prepared to trade at the end of the transition period.

Charles Michel, the president of the European Council, spoke to Joe Biden, the US president-elect, yesterday and, a source said, thanked him for “his clear support regarding the implementation of the Withdrawal Agreement the EU concluded with the UK last year”.

During the US election campaign, Mr Biden addressed controversy over the government’s Internal Market Bill by saying he would not allow peace in Northern Ireland to become a “casualty of Brexit” if elected president.

After four years of high politics it has all come down to haggling over the price of fish.

Brexit negotiators are spending another week hunkered down over legal texts, with discussions held over videocall after a member of the Brussels team tested positive for the coronavirus last week.

Michel Barnier is in self-isolation until Friday but is preparing to travel to London then, assuming he tests negative for the virus.

There are two main sticking points. Fishing remains the most intractable obstacle, with the EU demanding “stable and predictable” quotas in British waters while the UK continues to insist on annual negotiations.

France, Belgium, Netherlands and Denmark are asking for continued access to the six to 12-mile coastal zone around the UK.

One option being discussed by the EU team internally is extending the UK’s proposal for fishing changes to be phased over three years to a decade.

This would have significant implications, however: the EU has always been clear that fishing is a precondition for a free trade agreement, and few want to repeat negotiations in later years.

The second obstacle relates to aspects of the level playing field: the EU’s demand that Britain agrees to a minimum level of environmental standards and workers’ rights. Negotiators have closed, more or less, the issue of state aid, but the EU is now pressing hard for a “meaningful mechanism” to align British and EU regulations, which would be linked directly to the dispute enforcement structure.

The government’s problem is that this demand strongly resembles old EU proposals for regulatory alignment, with British legislation expected to change in step with the EU’s.

It is clear that the deadlines are more pliable than they first appeared. Now that talks are carrying on at least into early December, both sides are preparing creative ways to ratify the deal in UK and EU law before the transition period ends. Though it will be politically painful, any eventual agreement is now certain to be rushed through the legislatures.

Read more:
Michel Barnier to leave quarantine for final Brexit talks as deal is in sight