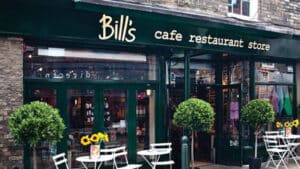 One of Britain’s leading restaurateurs has urged the government to abandon blanket Covid-19 restrictions or face “an atomic bomb” of unemployment in January.

Richard Caring, who owns chains including Bill’s and The Ivy Collection, said rules that had been “put in place without a great deal of thought” had turned out to be “a killer” for the hospitality industry.

“I think the government should take some time and look at things in detail rather than having blanket situations that make no distinction between different areas,” he added.

Speaking before the chancellor confirmed yesterday that the 10pm curfew was likely to be scrapped, Mr Caring questioned the government’s motives, saying: “When they say we’ll close pubs, we’ll close restaurants, we’ll put a curfew in, it’s done not from a position of knowledge but from a position of politics. A blanket curfew isn’t correct.

“They should take some time to consider it. They’re not aware of the permanent damage being done throughout the country.”

Mr Caring, 72, who last year sold a 25 per cent stake in his business to a Qatari investor, has about 170 restaurants and clubs, including Scott’s, Harry’s Bar, Sexy Fish and the original Ivy in the West End of London.

He has a personal wealth of £820 million, according to The Sunday Times Rich List, although that was before the 40 per cent slump in revenues this year from the pandemic.

Mr Caring was particularly critical of Michael Gove, minister for the Cabinet Office. “When it was announced we were going into lockdown until December 2, the very next day we have the cabinet minister coming out and suggesting it may well be extended again.

“If anybody was thinking of investing or looking for hope down the road, they absolutely kiboshed it. A statement like that means more people become unemployed.”

After visiting eight cities, including Glasgow, Liverpool and Leeds, he said it was obvious from the number of boarded up restaurants and pubs that the situation was critical and he predicted a “big explosion” in January.