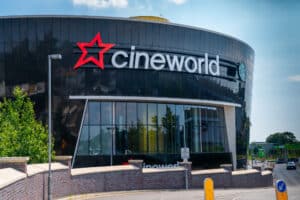 Some Cineworld cinemas are set to never reopen after the coronavirus lockdown as bosses consider permanent closures and job cuts in a desperate bid to save the struggling cinema chain.

The company has been hammered by the pandemic, which forced industry-wide closures seeing them shut all 128 of its venues earlier this month of its own accord, rather than under government orders – with 5,500 people said to be at risk of losing their jobs.

A lack of new films has meant cinemas have struggled to draw in audiences in recent months, with the postponement of the latest James Bond picture, No Time To Die, cited as the potential final straw for many.

It was reported last night that Cineworld, which owes some £6.2 billion to its lenders, was lining up a rescue package as a result, and that slashing rents and shuttering swathes of sites could be required to balance the books.

Even when the England-wide lockdown ends, Cineworld has no plans to open and has hired restructuring firm Alix Partners to hold emergency talks with lenders.

It is also understood to be considering raising money from investors or restructuring its debt top help avoid breaching its loan terms in December.

When last month’s closures were revealed, staff took to Twitter to slam the company for not telling employees about the plans before they were reported in the Sunday Times – which said in its report that it had approached Cineworld for a comment prior to publication.

One Twitter user said: ‘This is going out to all my fellow Cineworld colleagues up and down the country, wishing you the best in these early hours with the news of the closures.

‘Been with Cineworld for 12 years, to find out I’ve not got a job via Twitter; once again; is damn appalling.’

The announcement that the new 007 film would be delayed until April 2021 was made just weeks before it was about to be released, coming as a huge blow to cinemas.

The highly-anticipated movie had already been postponement from its original release date in April due to coronavirus.

Then, the release of the highly-anticipated Fast and Furious sequel F9 was also delayed again, while Disney announced in September that its live-action version of Mulan instead debut on its streaming service Disney Plus instead of a theatrical release.

Union Bectu, which represents staff in the cinema sector, urged filmmakers last month to think ‘carefully’ about the impact delayed releases could have on the industry.

A spokesperson said: ‘The delay in the release of the Bond film, along with the other delayed releases, has plunged cinema into crisis.’

Boss Philippa Childs said: ‘If these reports are true, then the first people Cineworld should be informing are their staff who will suffer as a result – not the Sunday newspapers.

‘Whilst cinemas have been able to open since July, and the experience of those who have visited since then has been an overwhelmingly positive one, the stark reality is that without new releases it is unlikely that footfall will increase to a level that makes opening financially viable.’

Cineworld, which also owns the Picturehouse chain and the Regal chain in the US, employs around 45,000 staff, including 5,500 in the UK.

Yesterday, the owner of London’s Trocadero Centre lodged a High Court claim against Cineworld, suing it for £1.4 million over unpaid bills, while shares were down 8.7 per cent in early trading.

Read more:
Some Cineworld cinemas will not reopen as bosses consider permanent closures and job losses in bid to save struggling cinema chain