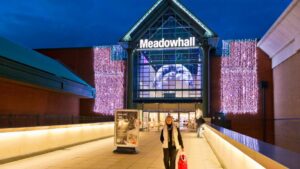 The new chief executive of British Land plans to convert shops and car parks into warehouses and delivery centres after announcing a £837 million fall in the value of its shopping centres and offices in only six months.

Simon Carter, 45, took over the role of chief executive yesterday from Chris Grigg, 61, who had led the company for 11 years.

The former finance director at British Land said there was potential to develop about 1.5 million sq ft of logistics property by converting existing stores or building on car parks and surplus land around shopping centres including Meadowhall in Sheffield. The company is using asset management initiatives, such as converting some shops to warehouses, offices and housing, to give investors more certainty about future rental income before they offload properties.

In contrast with the malaise affecting physical stores, the urban logistics sector has been fuelled by the rise in online shopping during the pandemic. “The biggest potential [for logistics] is around our retail parks,” Mr Carter said. “There’s this real crossover happening on retail parks between urban logistics, both in terms of where the rents are and more and more retailers using click-and-collect.”

A higher number of empty shops as a result of retailer administrations and company voluntary arrangements contributed to a 14.9 per cent decline in the value of the landlord’s retail assets in the six months to the end of September. The overall portfolio valuation fell by 7.3 per cent to £10.3 billion.

The value of its London offices, which include the Broadgate complex in the City of London, was down by 3.1 per cent amid concerns about future demand as companies adopt permanent flexible working policies.

British Land has sold £456 million of retail properties, including supermarkets and B&Q stores, since April. The landlord is shifting its focus towards mixed-use projects such as Canada Water, a 53-acre regeneration scheme in southeast London where up to 3,000 new homes, two million sq ft of workspace and a million sq ft of retail, leisure and community space are planned.

It warned of further pain in the retail and office sectors as a result of uncertainty caused by Brexit and Covid-19. However, it expects demand for its high-quality offices to remain strong as companies seek Covid-secure headquarters that promote innovation, collaboration, training and culture. The supply of high-quality space in London is expected to be restricted in the next five years after some developments were paused during the pandemic.

British Land was founded in 1856 as an offshoot of the National Freehold Land Society, which had been established by supporters of a movement to extend enfranchisement at a time when it was necessary to be a landowner in order to qualify for the vote. It has grown to become one of Britain’s largest listed landlords. The company, whose shares are trading at a discount of about 28 per cent to net asset value, is seen as being vulnerable to a takeover approach. Brookfield, a Canadian investment group, has built a 9.2 per cent stake in British Land during the coronavirus outbreak.

“We’re focused on having good assets, good strategy, delivering operational performance,” Mr Carter said. “That’s the best way that you defend against anything at any point in time.”

The writedown in the landlord’s property valuation, which was worse than some analysts had expected, led to a 10.3 per cent decline in the group’s net asset value per share to 693p. It reported a pre-tax loss of £757 million for the period, up from a loss of £440 million a year earlier.