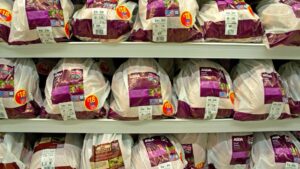 Shoppers are stocking up on festive groceries earlier than ever, with Asda yesterday reporting a surge in frozen turkeys and “lockdown-proof” items alongside a slowdown in quarterly sales.

The supermarket chain said that sales of Christmas trees had increased by 83 per cent, festive lights by 57 per cent, Christmas puddings by 71 per cent and mince pies by 44 per cent, compared with the third quarter of last year.

In a sign that families are preparing for smaller gatherings as social distancing restrictions may remain in place, sales of frozen turkey crowns, which serve three to four people rather than larger families, have increased by 230 per cent.

“After a rollercoaster year, it’s clear our customers are already planning for a very different Christmas,” Roger Burnley, 54, chief executive of Asda, said. “We have already seen a marked shift in buying patterns, with customers stocking up their freezers and cupboards with festive essentials earlier than ever before, which suggests they are getting used to expecting the unexpected but preparing to enjoy themselves as much as possible.”

Asda, with 631 stores employing 165,000 people, has a 14.4 per cent share of the UK grocery market. The chain was recently sold by Walmart in a £6.8 billion deal to the billionaire Issa brothers and TDR Capital, who together also own EG Group, a petrol forecourt business that is one of Britain’s biggest private companies.

Asda recorded a 2.7 per cent increase in third-quarter like-for-like sales for the period from July 1 to September 30, down on the 3.8 per cent rise in the previous quarter. It continues to have the slowest supermarket growth of the “Big Four” grocers, with recent figures from Kantar showing that its 5 per cent sales growth over the past 12 weeks was less than half that of Morrisons, its smaller rival, which has increased its sales by 11.4 per cent.

Under its new ownership Asda is focusing on its online and convenience business and has launched a trial of three stores on EG Group’s forecourts. It has reacted to a surge in demand for online deliveries by expanding its capacity from 450,000 slots in March to 765,000. It also has increased its delivery charge for Christmas slots to up to £7, having previously been free for minimum orders of £40. Tesco and Sainsbury’s have raised their delivery charges and Ocado has increased its minimum order spend to £90.