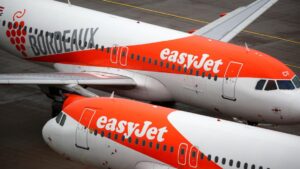 Easyjet has plunged to losses of nearly £1.3 billion and conceded that even while it has cut services by 80 per cent going into the winter that flight plan is aimed at only reducing further expected losses.

Despite the biggest loss in its 25-year history and a several months more yet of uncertainty, Johan Lundgren, the airline’s chief executive, insisted: “Easyjet has not only withstood the impact of the pandemic but now has an unparalleled foundation upon which to emerge strongly from the crisis.”

With the short-haul, pan-European operator having already warned of the extent of its losses, Easyjet shares rose 2¼p to 779¾p. Prior to the pandemic outbreak, the shares were trading at above £15.

Filings for the year to the end of September show Easyjet racked up losses from operations of £835 million before a further £438 million of one-off items took the total losses to £1.273 billion.

In the airline industry’s crucial spring and summer seasons which started with fleets grounded by the outbreak of Covid-19 and ended with the sector deeply troubled by incoherent travel and quarantine restrictions, Easyjet made underlying losses of £642 million.

That is nearly four times the losses posted by its great rival Ryanair which reported losses of £172 million between April and September.

The losses came after the pandemic halved Easyjet’s passenger numbers in the 12 months to 48 million. With the fares it was able to charge passengers being cut by more than 10 per cent, revenues plunged by 53 per cent to £3 billion.

Without the impact of the pandemic, Easyjet could have expected its 335-strong fleet of short-haul aircraft to carry about 100 million passengers. In the UK it has been the largest operator at three of the country’s top five busiest airports — Gatwick, Manchester and Luton. It is 33 per cent controlled by Sir Stelios Haji-Ioannou, its founder, who has spent much of the last decade since he left the board waging war against the company’s directors.

The airline’s losses include £123 million covering the redundancies of 4,500 or 30 per cent of its workforce, working out at average pay-offs of about £27,000 apiece. There is a £311 million charge for future losses on the unwinding of its foreign exchange and jet fuel contracts and £75 million of losses on the sale and leaseback of aircraft and the value of leased planes.

Despite the months of uncertainty to come, the prospect of Covid-19 vaccines and more coherent testing programmes for air travel led Mr Lundgren to insist that the £3.1 billion of cash it has borrowed or raised will see it through the crisis.

In a statement, the airline said: “Based on current travel restrictions in the markets in which we operate, Easyjet expects to fly no more than circa 20 per cent of planned capacity for [the October-December] quarter. We remain focused on cash generative flying over the winter season in order to minimise losses during the first half [to the end of March].

“We retain the flexibility to rapidly ramp up capacity when we see demand return. At this stage, given the continued level of short-term uncertainty, it would not be appropriate to provide any further financial guidance for the 2021 financial year.”