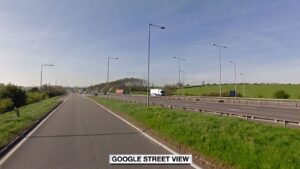 A manhunt is underway after £5m of Apple products were stolen from a lorry on the M1, police have said.

The vehicle was stopped and its driver and passenger tied up on the southbound slip road at Junction 18 in Northamptonshire on 10 November, according to Northants Police.

Forty-eight pallets of Apple products were stolen in the robbery, which happened between 7.45pm and 8pm, the force added.

The lorry was then driven to Eldon Close in Crick, where the suspects transferred the trailer on to their own truck and drove off.

Both the driver and their passenger, a security guard, were left stranded.

Police eventually found the truck in Lutterworth, Warwickshire, where detectives believe the suspects transferred the gadgets to a third vehicle.

Northants Police would like to speak to anyone who was in the area at the time or has been offered an Apple product in unusual circumstances.

The incident happened during the week that Apple launched its latest iPhone 12 models.

Anyone with any information relating to the incident is asked to call police on 101 quoting reference number 20000595599. Or alternatively, if you wish to stay anonymous, call Crimestoppers on 0800 555111.