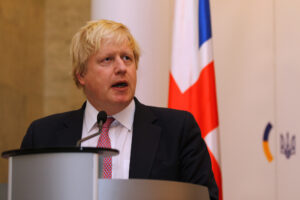 Ireland is warning that no post-Brexit trade deal will be struck if the UK pushes on with a plan to break international law.

Tensions have ratcheted up following comments by senior figures in both governments ahead of another crucial week for negotiations.

Ireland’s foreign minister Simon Coveney told Sky News that should Boris Johnson persist with trying to override parts of the EU divorce deal, then a new treaty on the future relationship will be off the table.

But a senior minister in the UK confirmed that Mr Johnson will stick to his plan and keep the controversial parts of the draft legislation in place.

Peers have removed the offending bits of the Internal Market Bill, which included giving ministers the power to “disapply” parts of the with withdrawal agreement relating to goods moving between Northern Ireland and Great Britain.

The bill is due to go back to the Commons soon, but Environment Secretary George Eustice said that all the original parts will be added again.

He faced down the ultimatum from Mr Coveney, who told the programme that if that happened then: “This is a deal that won’t be ratified by the EU.

“There is an absolutely unanimous view that if the British government deliberately decides to break international law and undermine a treaty that’s not even 12 months old, well then why would the EU sign up to a new deal, when the UK is breaking the existing one?

“Any logical person listening to that argument surely understands where the EU is coming from.”

But he added: “Having said that, I think we need to focus less on the legalities of these issues and more on actually resolving the outstanding issues.”

If the two outstanding trade deal disputes – fishing and state aid – can be ironed out, then “the issues that the [UK] government say they have, that they are dealing with, with the Internal Market Bill, effectively disappear anyway”, he added.

In a sign of movement ahead of more talks in Brussels next week, the UK’s chief negotiator, Lord Frost, said “there has been some progress in a positive direction in recent days”.

Though he cautioned “we may not succeed” so urged businesses to prepare for change when the transition period expires on 31 December, regardless of the outcome.

Labour has repeated calls for the government to strike a deal, shadow health secretary Jon Ashworth telling Sky News: “Because of coronavirus, the economy of this country has taken a massive hit. We know that getting a good deal with the EU will be better for people’s jobs.

“Boris Johnson told us he had an oven-ready deal… He’s got to deliver on his promise to the British people and get that deal.”

The UK’s stance has also come under renewed pressure due to the election of Joe Biden as US president-elect, given his past comments warning against peace in Northern Ireland becoming a “casualty” of Brexit.

The head of the government legal department resigned, as did a Tory minister, and past Conservative prime ministers and leaders – including Brexiteer Michael Howard – have opposed the bill, while Brussels has started legal action.

Mr Johnson has said the measures are needed to ensure the free-flow of goods across the UK.

Read more:
Ireland tells Boris Johnson there will be no trade deal if you break international law