BENCHMARK policy rates will likely be maintained by the Bangko Sentral ng Pilipinas (BSP) on Thursday, with the financial system seeing excess liquidity and an anticipated pickup in state spending, according to analysts.

Some analysts, however, pointed to the sluggish pace of recovery and benign inflation as signs there is still room for the central bank to further cut rates.

In a BusinessWorld poll held last week, 11 out of 16 analysts said the Monetary Board (MB) will likely continue the “prudent pause” at its sixth policy meeting on Nov. 19. 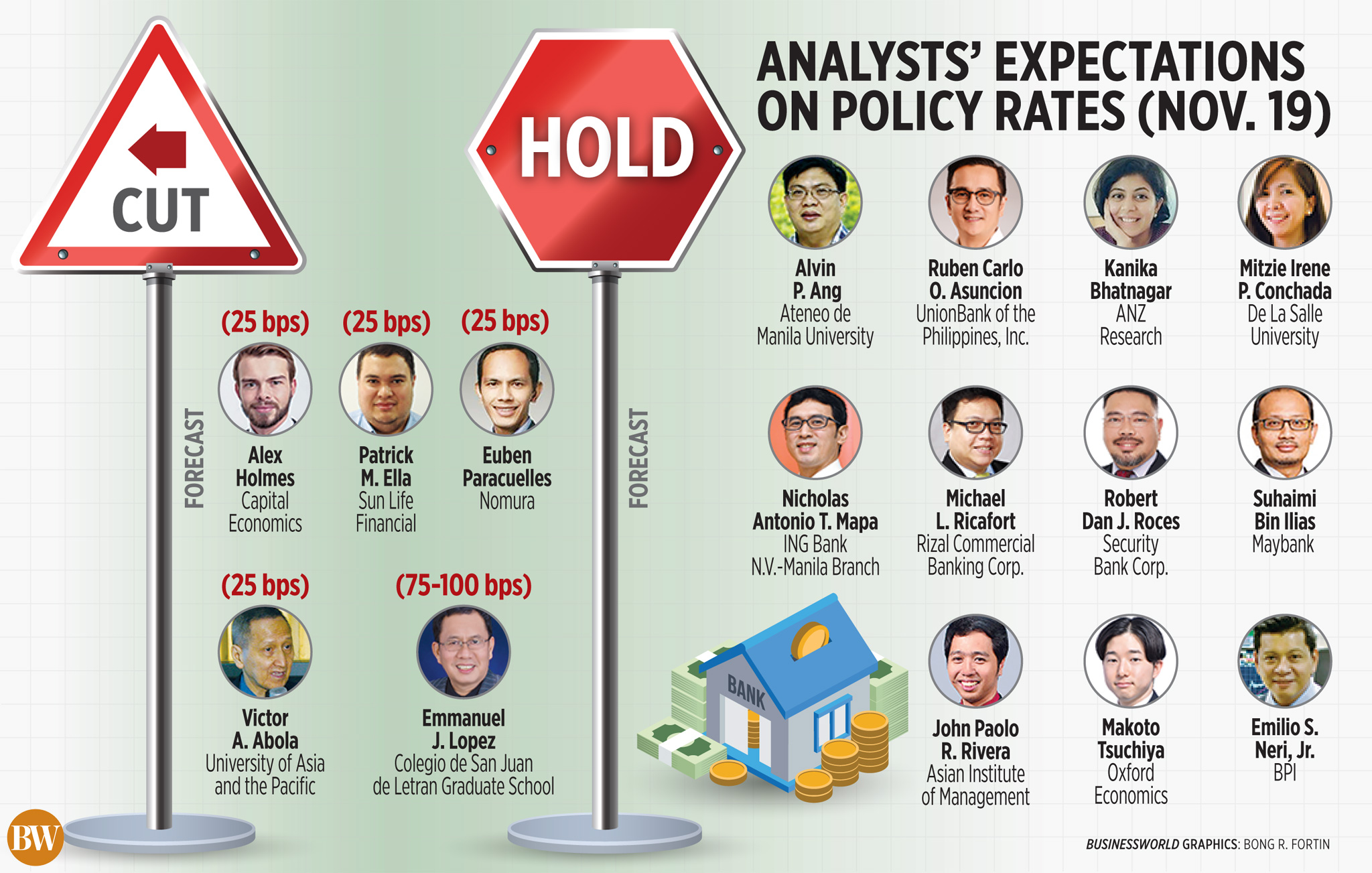 BSP Governor Benjamin E. Diokno has vowed to carefully assess the timing of the rolling back of aggressive policy measures taken during the coronavirus crisis to avoid serious repercussions to the economy.

So far this year, the BSP slashed rates by 175 basis points (bps), bringing down overnight reverse repurchase, lending, and deposit facilities to record lows of 2.25%, 2.75%, and 1.75%, respectively.

“We think they will maintain policy settings and will wait for lawmakers to pass laws that will more effectively stimulate the economy including approval of a bigger and better targeted 2021 budget such as in health, government guarantees, public construction, etc.,” Mr. Neri said.

The proposed P4.5-trillion national budget for 2021 is pending at the Senate. Legislators have committed to approving the 2021 national budget by Dec. 16, in time for its signing before the year ends.

“The just released third-quarter GDP (gross domestic product) data is showing signs the economy is off the worst in the second quarter 2020 and will gradually improve with progressive unwinding of quarantines,” Mr. Ilias said.

The economy shrank by 11.5% in the July to September period, better than the record 16.9% plunge in the second quarter when lockdowns were at their tightest.

“The subdued credit demand would be something of huge consideration as well and cutting rates further may not result in desired gains at this point. Excess liquidity is also one consideration at a time when market investors are looking high and low for more asset earnings,” he said.

Mr. Diokno has said the BSP’s policy measures infused about P1.9 trillion into the financial system, equivalent to about 9.6% of the GDP.

Despite this, bank lending grew by 2.8% in September, the slowest since the 2.4% seen in June 2007, as lenders tightened credit standards to guard against bad loans and consumer confidence remained low due to the pandemic.

“A much weaker pace of recovery further reinforces our view that more monetary easing will be warranted,” Nomura Holdings, Inc. Chief ASEAN Economist Euben Paracuelles said. He also said that monetary measures may have to make up for the weak fiscal spending.

“BSP will cut its policy rate by a total of 50 bps in the fourth quarter to 1.75%, delivered via a 25-bp cut in each of the monetary board meetings in November and in December. Beyond that, we expect another 25 bps in rate cuts by the first quarter of 2021,” he added.

Risks to inflation remain tilted to the downside, giving room for another rate cut, analysts said.

The central bank expects average headline inflation this year to settle at 2.5%, well within the 2-4% target.

In October, the consumer price index rose by 2.5%. With the benchmark rate at 2.25%, the negative real interest rate environment is the reason why analysts think the BSP might hold back on further easing.

But this should not be a cause of worry, said University of Asia and the Pacific economist Victor A. Abola, who is pricing in a 25-bp cut on Thursday. He said keeping positive rates is “not important” as a lot of countries are also experiencing this.

“[W]hy ‘enrich the banks’ with higher interest rates when the vast majority of people are suffering and dipping into their savings, if any,” Mr. Abola said.

After Thursday’s meeting, the MB will have another policy meeting on Dec. 17, which will be the last for 2020.